The Lions started well, kicking three of the first four goals. Before a Bayley Fritch goal pulled the quarter time margin back to 22-16. Melbourne had a massive second quarter, kicking six goals to one to set up a 58-28 half time lead.

Melbourne controlled the premiership quarter, kicking three goals to two, setting up an 83-43 three quarter time lead. Melbourne ran away in the last quarter, kicking five goals to one, including a stunning goal from Toby Bedford. As Melbourne blew the final margin out to 64 points.

This win returning Melbourne to the top of the table, with their 11th win of the year. They will look to build on this performance next week when they travel to face Adelaide on Saturday. Brisbane will look to bounce back when they host the Western Bulldogs on Thursday.

The Western Bulldogs survived a strong contest against Hawthorn, defeating them 125-83 on Friday.

The Dogs went on a rampage in the premership quarter, kicking the only six goals of the third quarter to take an 82-41 three quarter time lead. The sides kicked seven goals each in the last quarter, as the Dogs ran out winners by 42-points.

This win moving them into the 8. The Dogs will face a tough challenge in Brisbane on Thursday night. Hawthorn face a trip to Sydney to face the Giants on Sunday. 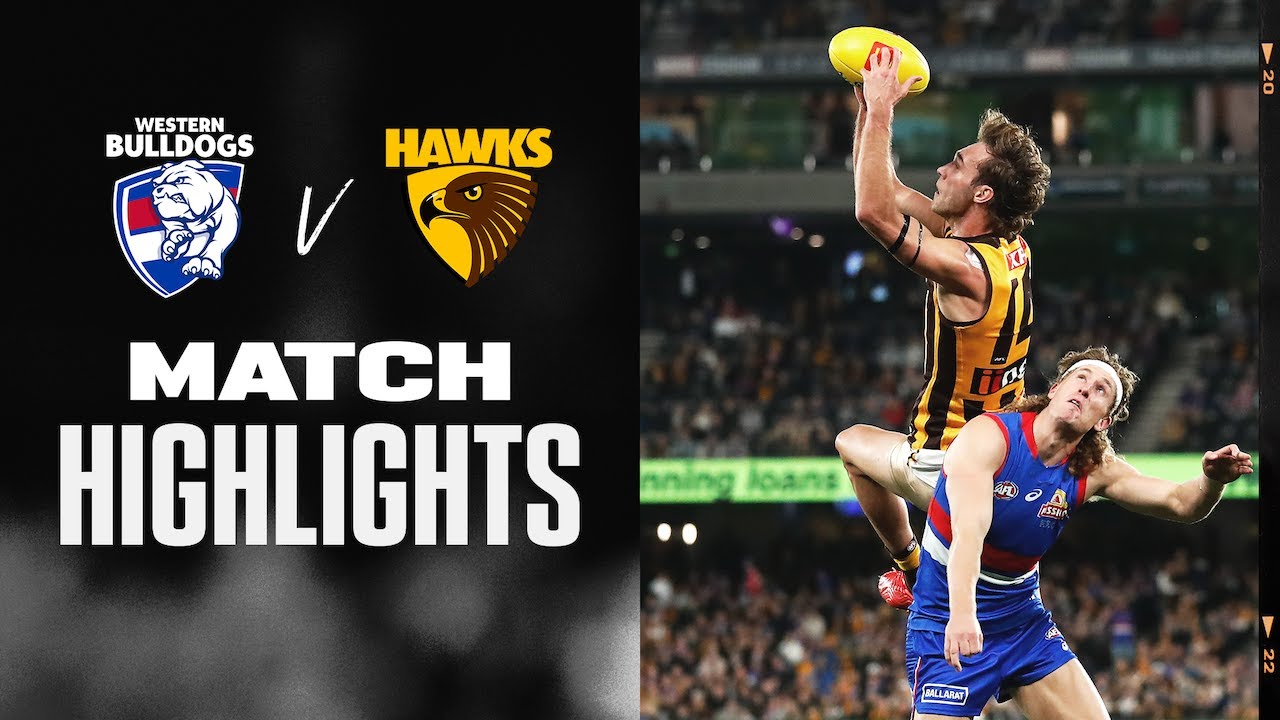 Essendon started hot, kicking five goals to three in the openning quarter to lead 35-21 at the first change. West Coast had a massive second quarter, kicking six goals to two to take a 57-52 half time lead.

West Coast controlled the third quarter and kicked four goals to three to take an 84-73 lead into the final change. Despite Essendon kicking four goals to three, the Eagles were good enough to hold on in the end by 10-points for their second win of the year, much to the delight of their fans.

This win getting West Coast off the bottom of the table. They face a tough trip to face Richmond at the MCG on Sunday however. For Essendon it gets no easier, when they face the Sydney Swans at the MCG on Saturday. 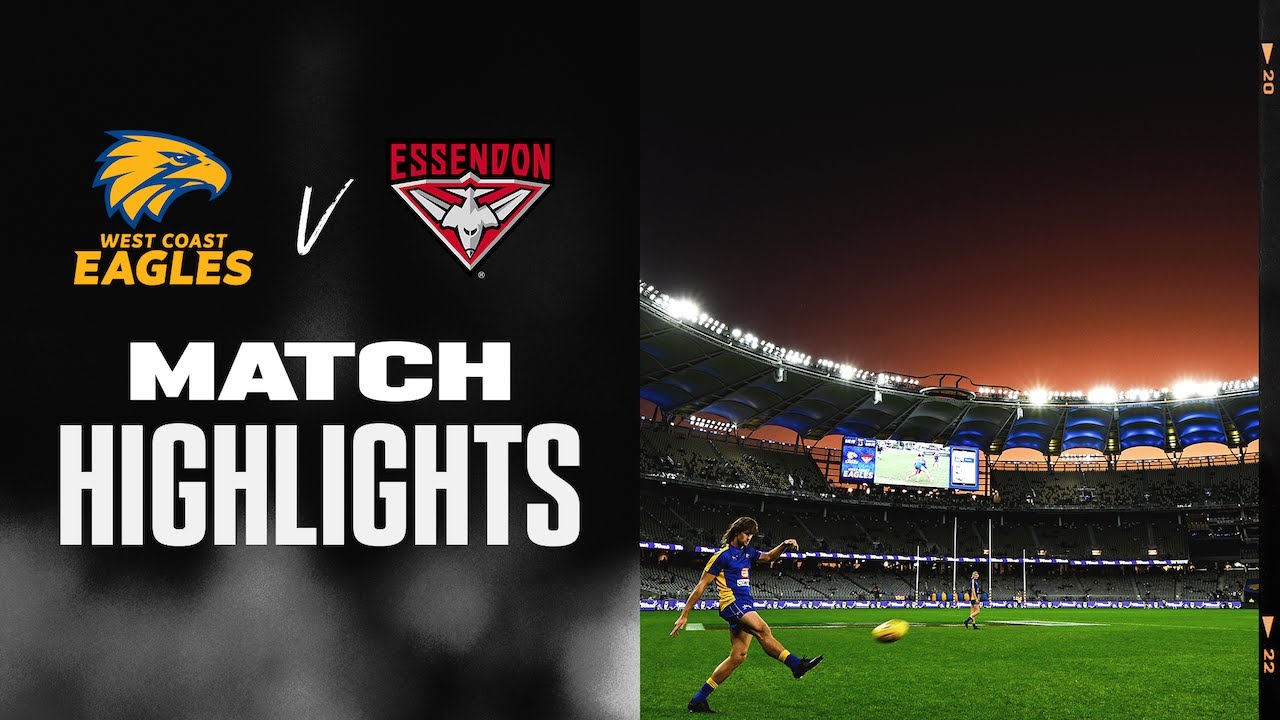 Carlton claimed win number ten, with an impressive 81-50 win over Fremantle on Saturday.

Fremantle got the openning three goals of the game, before Harry McKay’s late goal pulled the quarter time margin back to 18-9. Carlton lifted massively in the second quarter, kicking five goals to one to set up a 41-26 half time lead.

Carlton kept up the pressure in the premiership quarter, kicking three goals to two, with two late goals from Jack Silvagni and Charlie Curnow giving the Blues a 61-41 point lead at quarter time. Carlton were too strong in the last quarter, with three goals to one they were able to ran away with a 31-point victory. 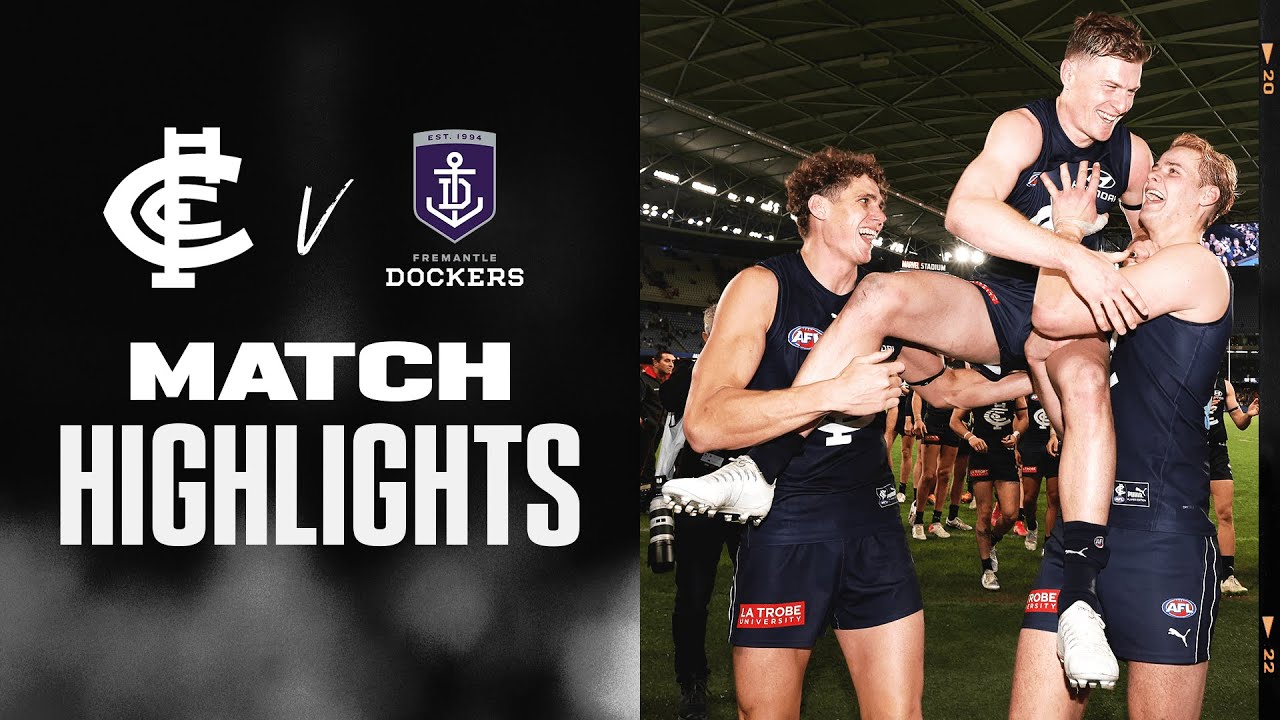 Geelong defeated Richmond in one of the games of the year 89-86 on Saturday. Jack Henry the hero with the winning goal late, after the Cats held out a massive comeback from the Tigers.

Geelong started brightly, kicking five goals to two in the openning quarter to lead 32-12 at the first change. The Cats got the openning two goals of the second quarter and grew their lead to as much as 35-points. Richmond then pulled back the next three, before Issac Smith provided a steadier for the Cats, as they took a 53-33 half time lead.

Richmond hit back hard in the premiership quarter, kicking five goals to one, as Hugo Ralphsmith gave the Tigers the lead. Richmond took a 67-62 three quarter time advantage. Richmond got the first two goals of the last quarter and took a 17-point lead, looking in complete control. Goals from Tyson Stengle and Brad Close got the Cats within five, before Jeremy Cameron regained the lead for Geelong. Maurice Rioli marked inside 50 and with two minutes to play, his goal looked to be the winner for Richmond as he slotted it home. The Cats got the clearance, Stengle’s long ball inside 50 found Henry who went back with the flight for a courages mark. With a little over a minute to play, Henry slotted the winning goal for the Cats, as Richmond tried to get it forward, Geelong’s defence held firm.

With the ball thrown in inside the Tigers forward line, the siren sounded to delirious Cats fans and players, they pulled off one of the wins of the year and survived a massive charge back from one of the strongest teams in the comp. Geelong with this win, climb to second place on the ladder. Geelong will look to build on this form when they host North Melbourne on Saturday night at GMHBA Stadium. Richmond will look to bounce back when they host West Coast at the MCG on Sunday. 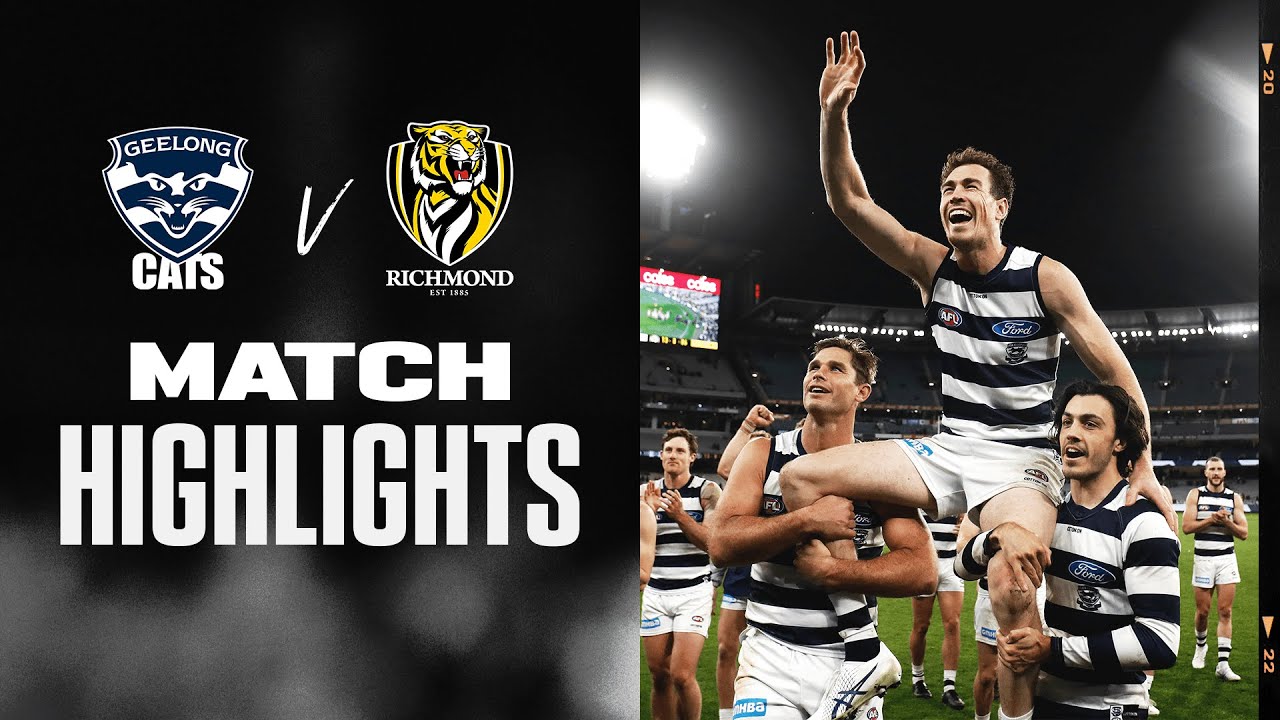 The Swans started strongly kicking three goals to one in the openning quarter, leading 19-8 at quarter time. Both sides only added a goal each in the second quarter, as Sydney lead 30-14 at the half.

Sydney moved into 6th position with their ninth win of the year. Sydney will look to continue winning form when they face Essendon at the MCG next Saturday. This loss drops the Saints out of the top 8 into 10th position, it gets no easier when they face Carlton on Friday night. 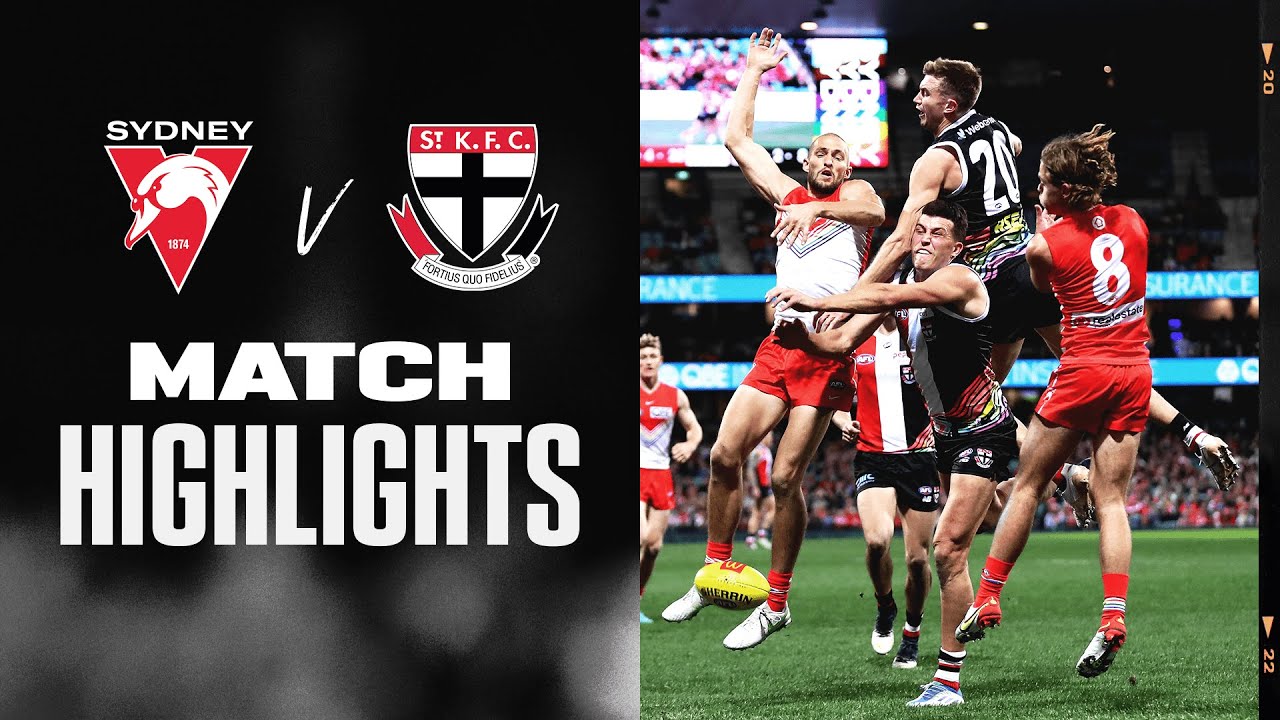 Adelaide made light work of North Melbourne, defeating them 115-58 on Sunday.

It was a high scoring first quarter with Adelaide kicking five goals to four to lead 33-24 at the first change. Adelaide kicked the only two goals of the second quarter to lead 48-28 at the half time break.

Adelaide controlled the third quarter, kicking four goals to two to grow the three quarter time margin to 75-44. The Crows used the last quarter to blow North out the water. Kicking six goals to two to run away with a 57-point victory.

With this loss, North are resigned to the bottom of the table. It gets no easier when they travel to face Geelong next Saturday night. Adelaide will host Melbourne on Saturday afternoon.

Collingwood maintained the pressure in the premiership quarter, kicking four goals to three to lead 71-34 at the final change. GWS kicked the first three goals of the last quarter to get it back to 20-points. Before Collingwood steadied their ship with the next two goals to get the margin back out to 32-points. GWS were trailing by 33-points with under 11 minutes to play, but threw everything at a comeback. They piled on the last four goals of the game, but Collingwood were good enough to hold out in the end for an 11-point victory.

This win, Collingwood’s fifth in a row, lifting them into the top 8. They will look to continue this run when they travel to take on Gold Coast on Saturday night. GWS will host Hawthorn on Sunday afternoon. 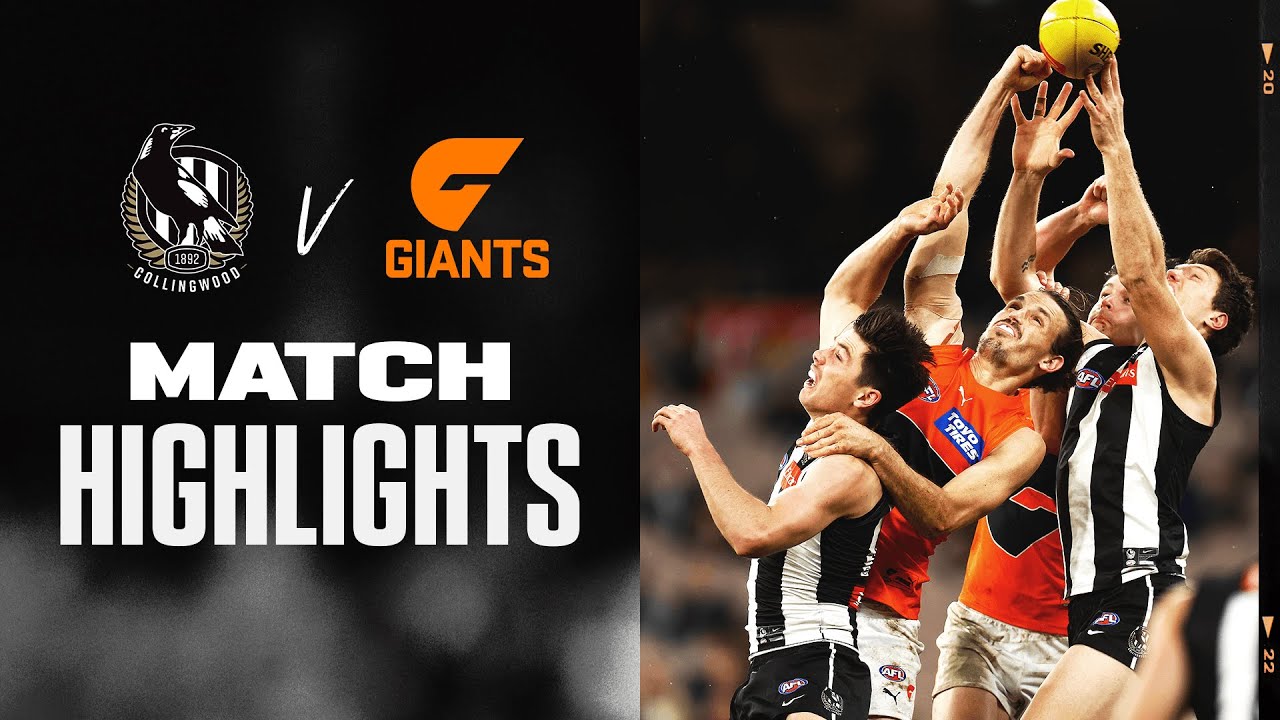 Port started strongly, kicking five goals to two in the openning quarter, leading 34-16 at the first change. Gold Coast hit back hard in the second quarter, kicking three goals to one, with Port leading 44-39 at half time.

It was a high scoring third quarter, Port kicking six goals to five to lead 83-70 at the final change. The Suns got the openning goal of the last quarter before Todd Marshall responded for Port. Mabior Chol drew the Suns within four points, before Port inaccuracy only kept them eight-points up. As Nick Holman drew Gold Coast within two-points late. Ports defence held firm late and cleared it out as Sam Powell-Pepper got it to the line as the final siren sounded, Port held out by two in a thriller.

Port face a tough trip to face Fremantle in Perth on Sunday. Gold Coast will host an interesting contest against Collingwood on Saturday night. 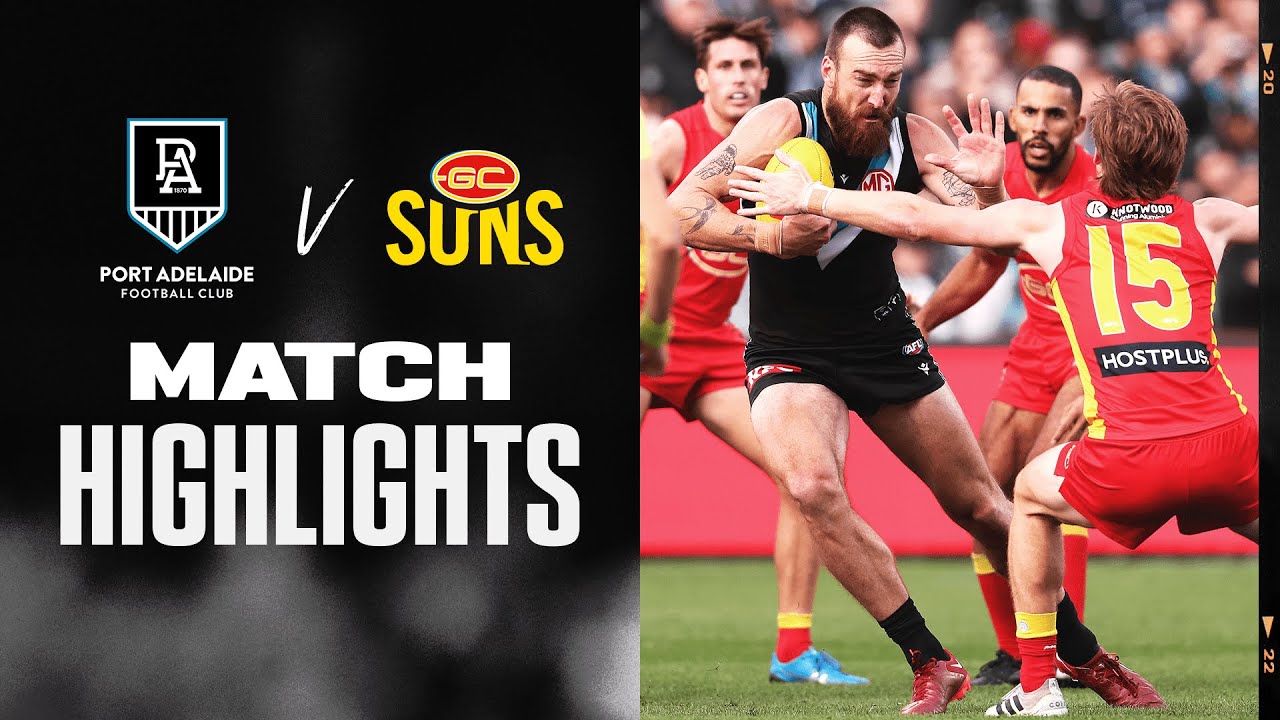