Melbourne returned to winning ways with a 85-39 victory over Fremantle on Friday night.

The Demons dominated from the beginning, kicking four goals to two in the first quarter to lead 27-14 at quarter time. Melbourne stepped up more in the second quarter, kicking three goals to one to extend the half time margin to 49-22.

The premiership quarter truly belonged to Melbourne, as they kicked three goals to one yet again, extending the three quarter time margin to 71-29. Melbourne kicked two goals to one in the last quarter, the final margin a 46-point win for the Demons.

Melbourne’s 14th win of the season keeps them in second position. They face Collingwood on Friday night in a game that could potentially decide who will finish top two, with Collingwood winning 10 games in a row, Melbourne will be desperate to end their streak. Fremantle will look forward to traveling to Melbourne to take on the Western Bulldogs on Saturday. 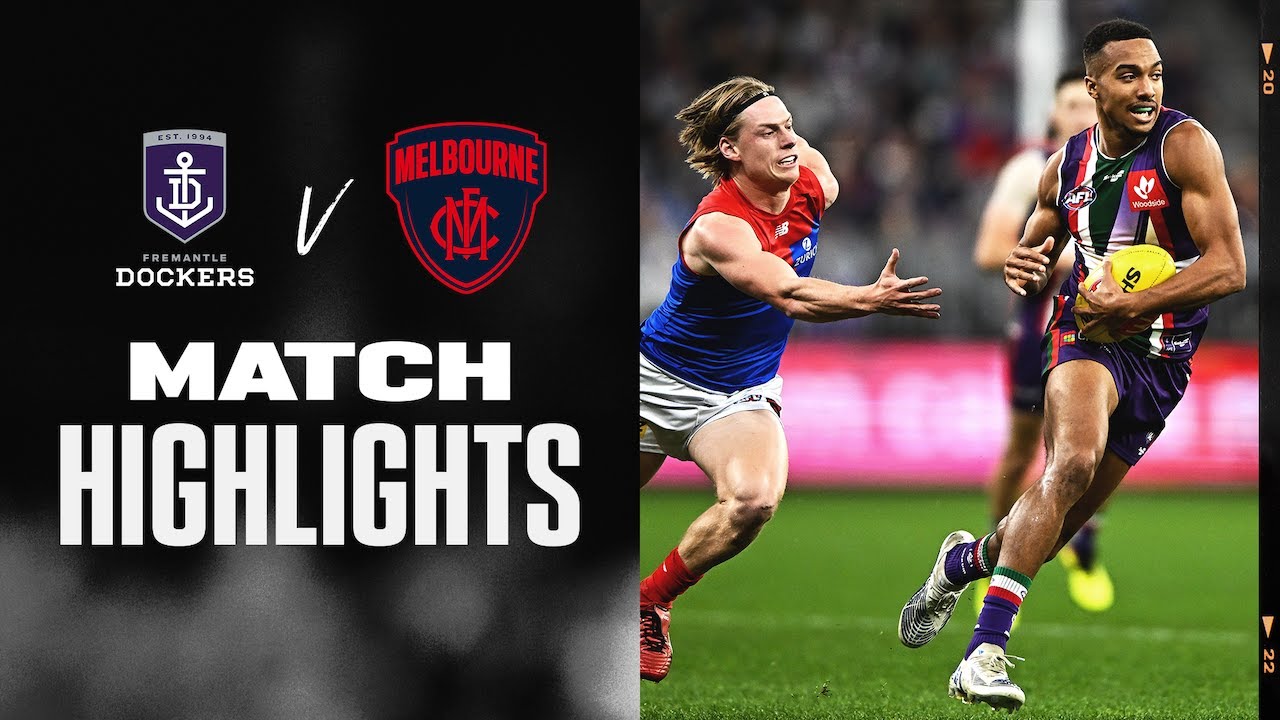 Collingwood defeated Port Adelaide in another close thriller 88-82. Making it 10 wins in a row.

Port started brightly, kicking six goals to two in the openning quarter to take a 39-27 quarter time lead. Collingwood rebounded in the second quarter, kicking the only three goals to go into half time with a 47-42 lead.

Collingwood remained in control in the premiership quarter, kicking four goals to two to take a 74-57 three quarter time lead. Jamie Elliot kicked a stunning goal off the ground to get Collingwood out to a four goal lead. Port kicked the next two goals before Josh Carmichael responded for Collingwood. Goals from Mitch Georgiades and Jase Burgoyne drew Port Adelaide within a straight kick with a minute to play. But Collingwood were good enough to hold on for their 10th straight victory, holding on in yet another close contest.

Collingwood’s 14th win of the year moves them as high as third position at the end of round 20. They face a massive test in Melbourne next Friday night, in a game that could potentially decide who will finish top two. Port Adelaide look forward to hosting Richmond on Saturday night.

Sydney kicked six goals to three in the openning quarter to lead 38-19 at the first change. They extended that margin in the second quarter, kicking the only three goals to get out to a 60-23 half time lead.

The Swans had a strong premiership quarter, kicking four goals to two to blow the three quarter time margin to 86-36. Sydney kicked the only four goals of the last quarter to run away with a huge 73-point win.

Sydney’s 13th win of the year, moves them into the top four at the end of 20 rounds. Next up they travel to face North Melbourne at Marvel Stadium on Sunday. GWS will host Essendon on Saturday afternoon.

St Kilda held on to defeat Hawthorn 75-63 on Saturday evening.

The Saints kicked two goals to one in the first quarter to lead 14-8 at quarter time. The Saints took charge in the second quarter kicking the only three goals to blow the half time margin out to 37-11.

St Kilda maintained control in the third quarter, kicking four goals to three to lead 64-30 at the final change. Max King got the openning goal of the last quarter to give the Saints a 42-point lead. Before Hawthorn kicked the final five goals of the game to reduce the final margin to 12-points.

The Saints holding on for win number 11, keeping them just inside the top 8 at the end of round 20. Next week they face a tough trip to Geelong to take on the top of the table Cats. Hawthorn will host the Gold Coast up in Tasmania on Saturday afternoon.

Adelaide caused a big upset over Carlton, defeating them 84-55 on Saturday night.

Adelaide turned the game on their terms in the premiership quarter, piling on three goals to one to take a surprising 57-42 three quarter time lead. Matt Cottrell gave the Blues some hope with the first goal of the last quarter, before Adelaide responded through Taylor Walker. Cottrell again responded for the Blues, before Lachie Fogarty took on the defenders and kicked one of the goals of the year to wrap it up for Adelaide. With the final two goals of the game, Adelaide blew the final margin out to 29-points.

A monumental upset, with Adelaide winning game number six for the year, inflicting pain on the Blues finals ambitions. Carlton only had to beat a bottom four side to have their foot in the door of September action, but Adelaide outclassed them and with Carlton facing a tough final three games, they will have to pull out something special and hope results go their way to break a nine year finals draught.

Adelaide will travel face West Coast next Sunday evening. Whilst for Carlton, it gets no easier when they travel to face the Brisbane Lions on Sunday.

Geelong came from behind in a tough contest to defeat the Western Bulldogs 94-66 on Saturday night. In Joel Selwood’s 350th game, it was the result he was after.

The Bulldogs were out of the blocks, kicking the openning four goals of the game, to Geelong’s only goal of the quarter coming through Patrick Dangerfield. The Dogs lead 27-8 at quarter time. The Cats steadied in the second quarter, kicking three goals to two to get the half time margin back to 41-30.

Geelong made all the running in the premiership quarter, kicking the only eight goals of the quarter to get out to an 80-44 three quarter time lead. The Dogs kicked three goals to two in the last quarter, but Geelong were good enough to hold on for a 28-point win.

Geelong’s 15th win of the year, keeps them a game clear on top of the ladder. They will host St Kilda next Saturday night. The Bulldogs will host Fremantle on Saturday afternoon at Marvel Stadium.

The Eagles worked their way back into the contest in the third quarter, kicking four goals to three with the Gold Coast with still a 86-61 three quarter time lead thanks to a screamer and goal after the siren from 50 gamer, Marbior Chol. Chol got the first goal of the last quarter to get Gold Coast out to a five goal lead. Before the Eagles made a huge comeback attempt, kicking the next five goals to get it remarkably back to two-points the difference. Before Chol responded for the Suns with goal number 5. Jake Waterman gave West Coast one last role with under a minute left, before Malcom Roses iced it for the Suns with 15 seconds left. Jamaine Jones pulled back a consolation goal right on the final siren, but it was to little to late, as the Suns held on for a thrilling three-point win.

Gold Coasts ninth win of the year. They will look forward to facing Hawthorn in Tasmania on Saturday afternoon. West Coast will host the Adelaide Crows on Sunday evening.

Richmond came from 42-points down to defeat the Brisbane Lions 104-97 on Sunday afternoon.

Brisbane were out of the blocks with the openning six goals of the game. Richmond pulled two back before Charlie Cameron responded for the Lions, as they took a 44-15 quarter time lead. Brisbane kept control in the second quarter, kicking four goals to three to take a 72-36 half time lead.

The Tigers of old owned the premiership quarter, storming back into the game with six goals to two in the third quarter. By three quarter time the Tigers had reduced the margin to 87-76. Hugh McCluggage got the openning goal of the last quarter. Jack Riewoldt and Noah Cumberland with his fifth for the afternoon drew Richmond back within a kick. Before Daniel Rioli unloaded one from the centre square to give Richmond the lead for the first time. Charlie Cameron had the chance to give his side the lead back, but his shot only levelled the game. Then with a rushed behind and Richmond leading by a point, the Brisbane Defence rushed the kick out and it went into the hands of Tom Lynch, who went back and sealed the 42-point come from behind win for Richmond.

Richmond home in an MCG classic, win number 10 keeps them alive in ninth place. They face a trip to Adelaide to take on Port next Saturday. Brisbane will host Carlton on Sunday afternoon in what will be another fascinating contest.

Essendon started brightly, kicking five goals to two to lead 31-16 at quarter time. Essendon kept their foot on the gas in the second quarter, kicking four goals to three to set up a 59-36 half time lead.

Essendon’s seventh win for the year, they look forward to traveling to Sydney to take on GWS on Saturday. North will host the Sydney Swans on Sunday afternoon.