Despite the challenge from the Saints, the Lions were still good enough to get over the line and make the Saints chances of finals very grim.

It was a hotly contested first quarter, both sides kicking three goals each with Brisbane leading 20-19 at quarter time. The Lions had a strong second quarter, kicking four goals to one and setting up a 48-26 half time lead and looked to be cruising towards victory.

With their season really on the line, the Saints put in a massive effort to turn the tables in the premiership quarter. They piled on five goals to one to take the lead into three quarter time at 61-56. But inaccuracy would cost the Saints in the last quarter, as they missed five scoring shots on goals for a 0.5 score, while the Lions kicked four goals to win in the end by 15-points. Keeping their place in the top four with one round to go.

Brisbane will host Melbourne in a massive clash on Friday night, if Brisbane win they will move into the top three. If either side looses, they could drop out of the top four depending on other results too as low as sixth. The Saints season comes down to their final game when they host the Sydney Swans at Marvel. But they need to win massively, which is unlikely, plus have results go completely their way. It is unlikely after this loss to the Lions that we will see the Saints in September action this year. 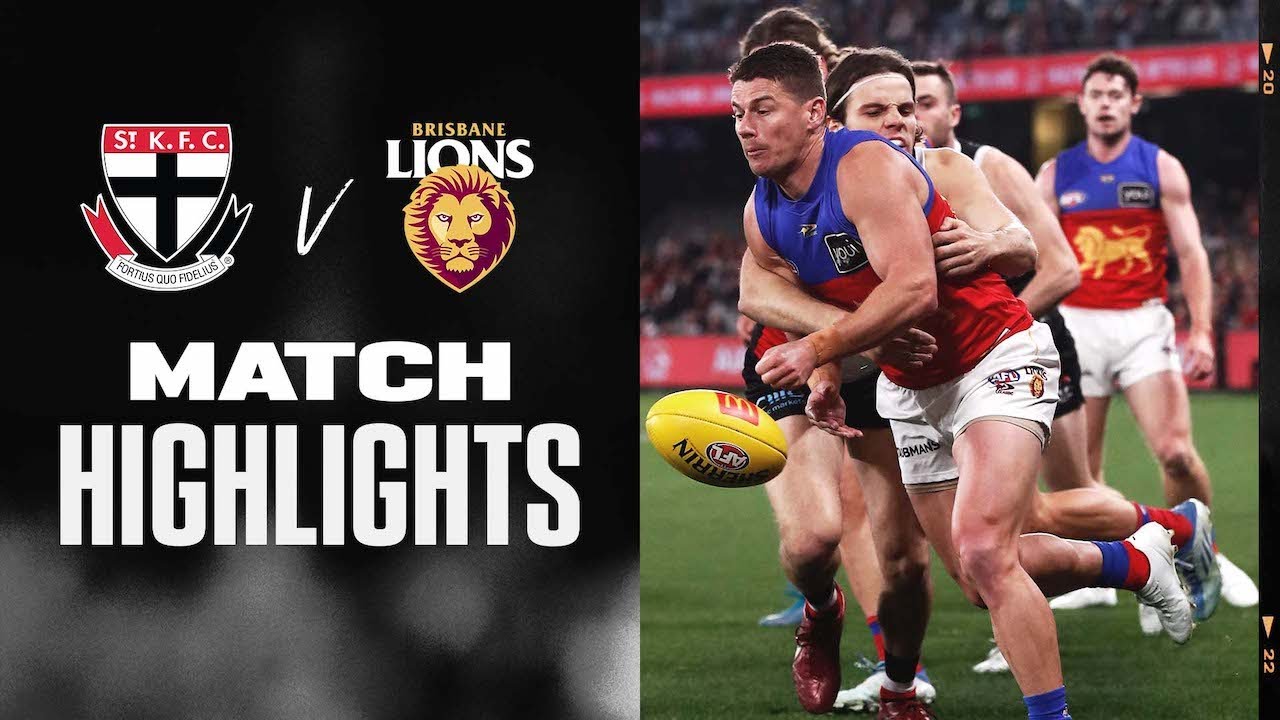 The Bulldogs survived a massive scare from GWS, to keep their finals hopes alive with a 62-57 victory on Saturday afternoon.

Jamarra Ugle-Hagan the hero with the match winning goal, meaning the Dogs still have a pulse in season 2022.
The Dogs started well, kicking three goals to one in the first quarter, taking an 18-7 lead into quarter time. The Giants came back in the second quarter, kicking two goals to one, as the Bulldogs led at half time 25-21.

It was a massive premiership quarter, GWS kicking five goals to four in a really big challenge. After the Dogs kicked four in a row to lead by 15-points with under five remaining in the third, the Giants kicked three goals in quick succession, as

Lachlan Keeffe’s snap gave the Giants a surprise 54-50 three quarter time lead. With 10 minutes to play, Ugle-Hagan became the hero, taking the mark and kicking the goal to put the Dogs in winning position. They were able to hold on in the end by five-points and get out of jail.
The Dogs 11th win of the year, keeps them within one game of the top eight. Their season comes down to two things. They must beat Hawthorn when they travel to face them in Tasmania next Sunday. Also, rely on Collingwood to beat Carlton. GWS will round out their season when they host Fremantle, a side looking to try and finish in the top four still, on Saturday afternoon. 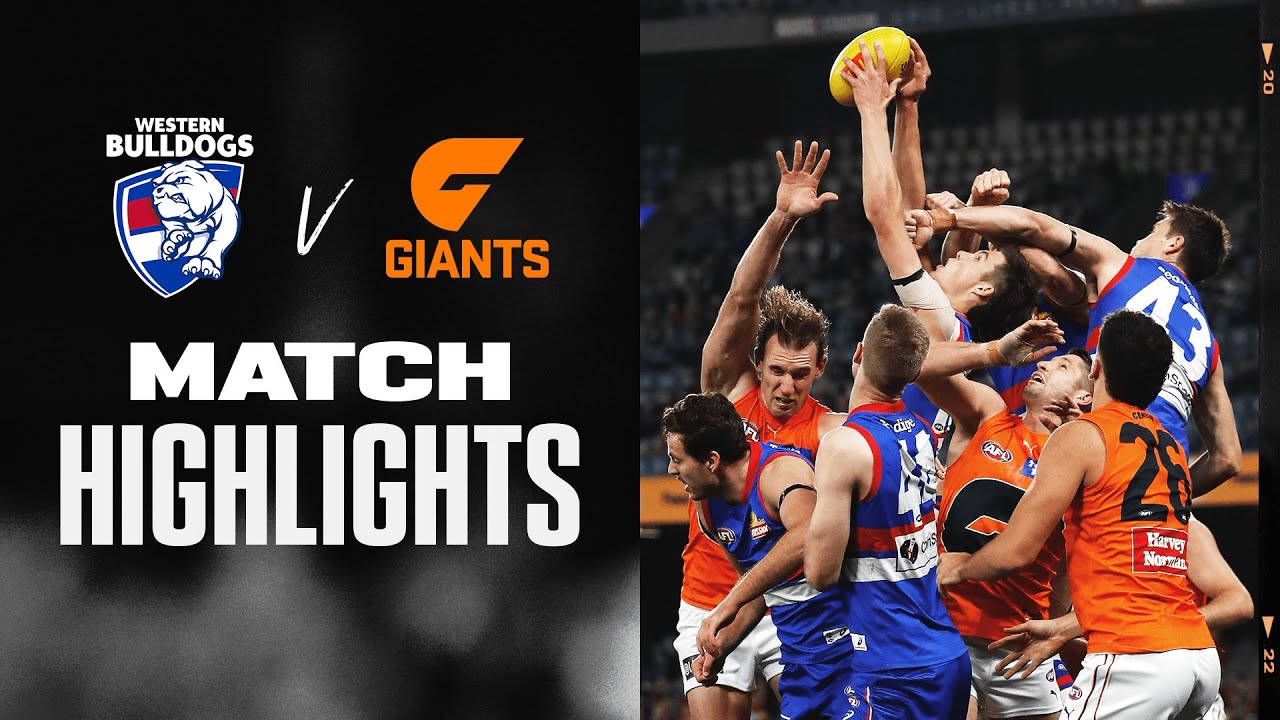 Adelaide made it three in a row, surviving a challenge from North Melbourne to win 103-74 on Saturday afternoon.
It was a close first quarter, Adelaide kicking four goals to three in the first quarter, taking a 31-21 quarter time lead. North showed a lot of determination in the second quarter, kicking five goals to three to take a surprising 57-49 half time lead.
Adelaide steadied the ship in the third quarter, kicking three goals to two and by the final change we were all tied up at 70. It was the Crows who ran away with it in the last quarter, kicking the only five goals as North ran out of legs. The Crows home by 29-points for their third straight win.
Adelaide’s eighth win of the year moves them out of the bottom four, they are rebuilding smoothly and have a lot of hope for season 2023. They will wrap up their season when they face Port in the showdown on Saturday night. North will also round out their season, that has been without doubt a complete misery, when they host the Gold Coast Suns on Saturday. Most likely, they will be confined to their second consecutive wooden spoon. 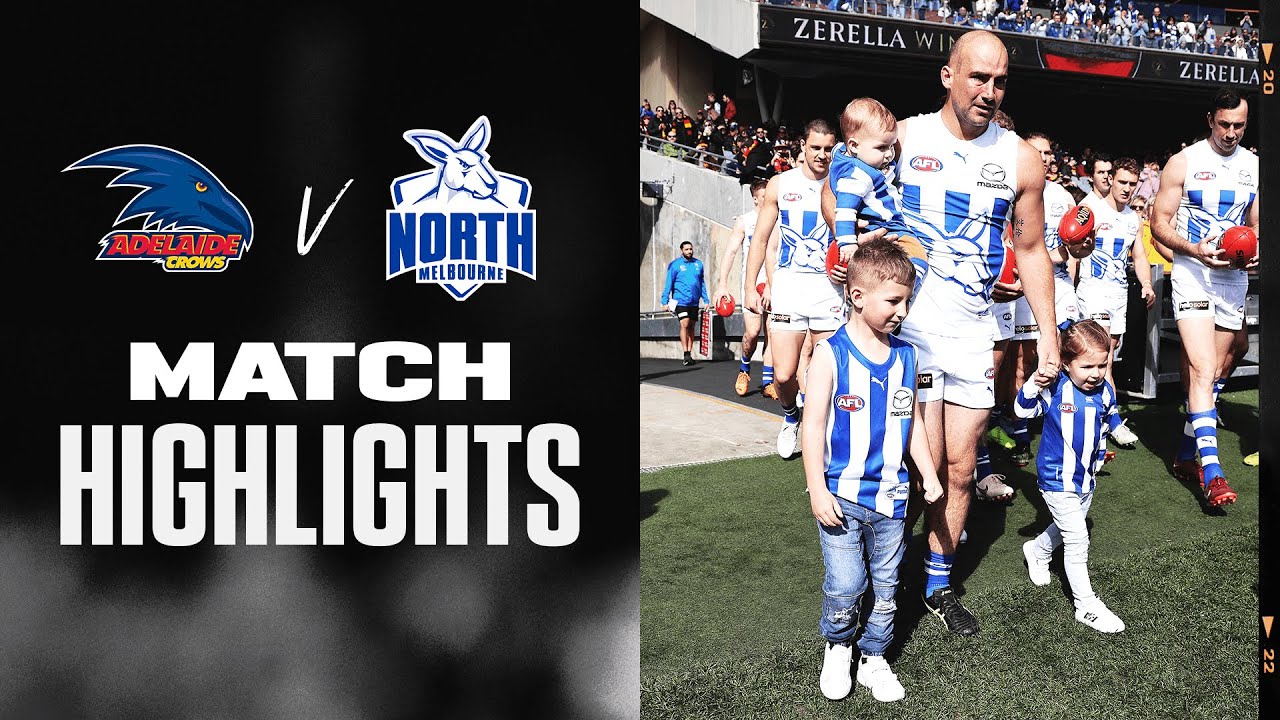 Geelong secured the minor premiership with a massive 119-59 victory over the Gold Coast on Saturday night, winning their 12th consecutive game.
It was all the Cats right from the start, kicking seven goals to two in the openning quarter to lead 45-14 at quarter time. Geelong controlled the second quarter, kicking five goals to two to set up a massive 77-26 half time lead.
Both sides kicked three goals a piece in the third quarter, with Geelong leading 99-44 at the final change. It was Geelong who  controlled the last quarter, kicking three goals to two to run away to a 60-point win.
Geelong’s 17th win of the season, puts them two games clear on top of the table with one to go, due to other results going their way. They have deserved the minor premiership, as they have been the most consistent side this season. Not dropping a game since round nine, when very few would have considered they could be minor premiers and flag favourites come the end of the season. Geelong will wrap up their season when they host West Coast on Saturday evening. Gold Coasts season will round up against North Melbourne on Saturday afternoon at Marvel, one thinks they will end their positive season on a high. 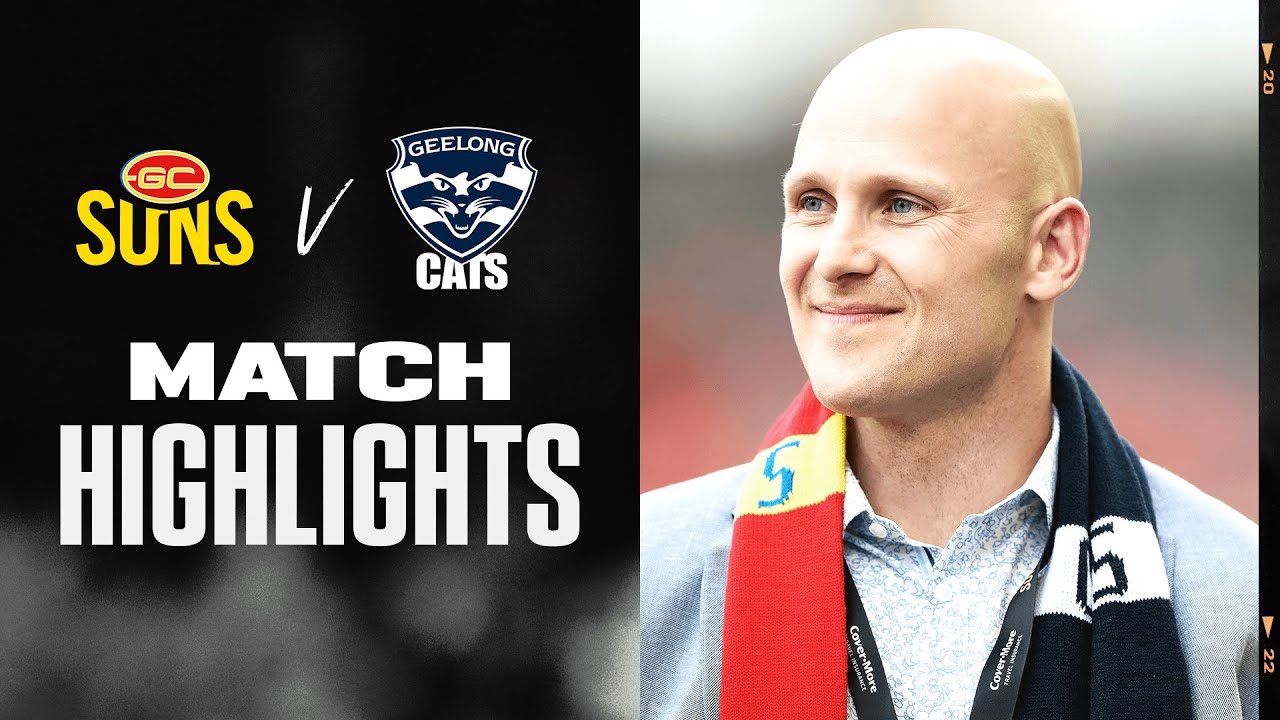 Melbourne stole victory from the jaws of defeat, with Kysaiah Pickett snapping the match winner with 11-seconds to play. As Melbourne denied Carlton a guaranteed finals spot with a 79-74 victory on Saturday night.
The lead changed four times in the last quarter, in what could possibly be the game of the year. Carlton led by eight-points with less than two minutes remaining, only for Melbourne to make the great escape due to a lapse in Carlton controlling the ball with a minute to go.
It was a tight contest all night. Both sides kicking a goal each in the first quarter, Melbourne leading 9-8 at quarter time. Melbourne kicked three goals to two in the second quarter, with Bayley Fritch taking a screamer and kicking a goal after the half time siren to extend the margin to 30-22.
Carlton put on the pressure in the third quarter, kicking four goals to three to bring the three quarter time margin back to 53-50. Jack Martin gave the Blues the lead, before Ed Langdon wrestled it back for Melbourne. Martin rolled it through again to give Carlton back the lead. Before Carlton missed three scoring shots in a row and could have grown the margin a lot bigger, Ben Brown stepped up to reduce it back to one-point.
As Charlie Curnow took a courages mark and kicked the goal with three minutes to play, and Carlton up by eight, the Blues thought they were about to enter the September doors, as their fans and players erupted around the MCG. Only for the party to be spoiled, as Jake Melksham marked a four on one in the square and reduced it to a one point with a tad under two minutes to play. As Carlton went into slow the game down mode, they turned it over and Melbourne forced it out of bounds, before surging it forward one last time. As the ball dropped to a pack, Melksham hand passed it out to Pickett, who snapped while being brought down, as the ball floated through the big sticks with 11-seconds remaining, as Blues hearts broke all around the country. Melbourne in an absolute steal, home by five-points, in a game the Blues had control but only have themselves to blame, in yet another case of “what could have been”?
This win meaning Melbourne need to beat the Lions on Friday night to secure their spot in the top four. This loss meaning Carlton’s season comes down to if they can somehow cause an upset over Collingwood next Sunday. But they never should have been in this position and only have themselves to blame. Losses against St Kilda, Adelaide and now this heartbreaker against Melbourne, all games that were easily winnable, means that Carlton needs to beat Collingwood and or rely on Hawthorn to cause an upset over the Bulldogs just to make the finals for the first time since 2013. 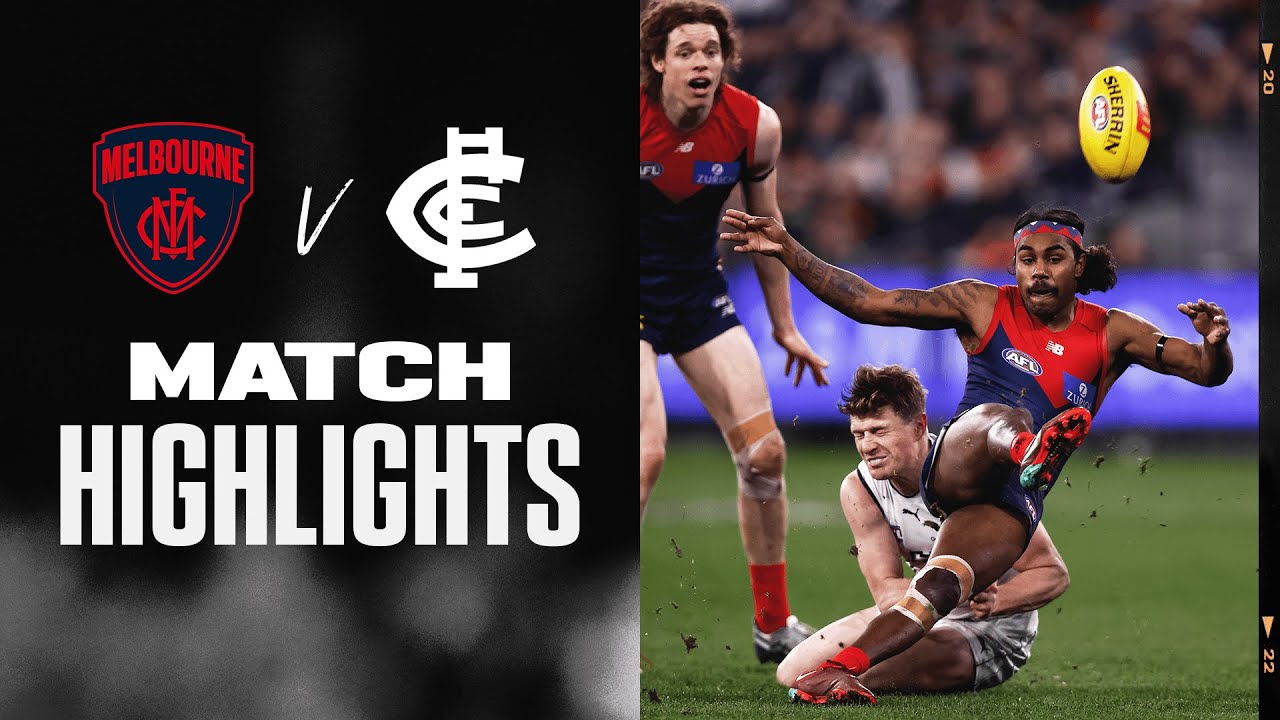 Fremantle defeated West Coast 71-47 on Saturday night, despite a very big challenge from the Eagles.
West Coast kicked four goals to three in the openning quarter to lead 24-22 at quarter time. Fremantle kicked two goals to one in the second quarter, taking a 36-32 half time lead.
It was the same story in the third quarter, as Freo kicked two goals to one to lead 56-39 at the final change. It could have been a lot more if not some inaccurate kicking. Fremantle again kicked two goals to one for the third consecutive quarter, to win in the end by 24-points.
It was far from convincing, but Fremantle wrapped up a top six finish. They will travel to face GWS next Saturday and if results go their way, they could finish as high as forth position with a double chance. West Coast will travel to Geelong to round out what has been a dismal season for their club. 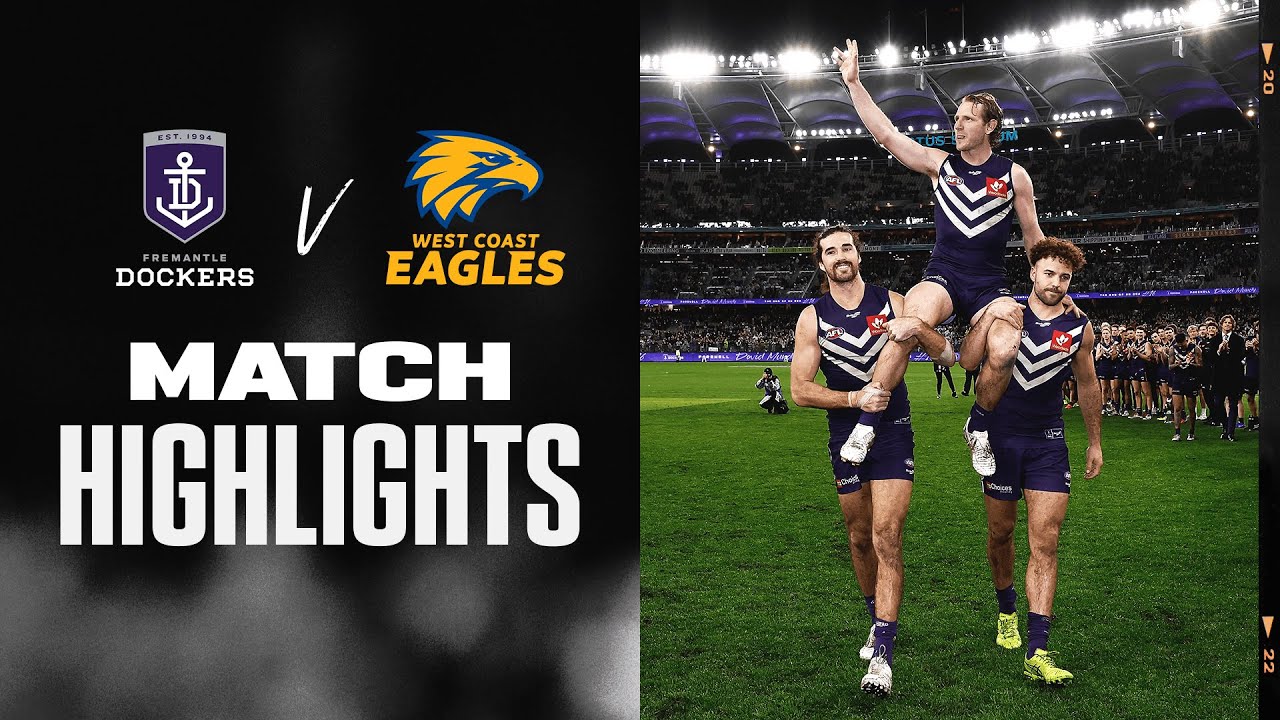 Richmond booked their spot in September action, following a 128-67 demolition of Hawthorn on Sunday afternoon.
It was all Richmond from beginning to end. Kicking six goals to one in the first quarter, leading 38-7 at quarter time. Both sides kicking three goals each in the second quarter as Richmond held a 57-29 half time lead.
The Tigers used the premiership quarter to blow Hawthorn out of the water, kicking a massive nine goals to one, to blow the three quarter time margin out to 113-40. Richmond clocked off a little in the last quarter, as Hawthorn kicked four goals to two, as Richmond ran out 60-point winners to climb back into the finals after last years disappointment of missing out.
Richmond will secure seventh position as long as they beat a rattled Essendon on Saturday night. Hawthorns season will wrap up in Tasmania against the Western Bulldogs on Sunday. 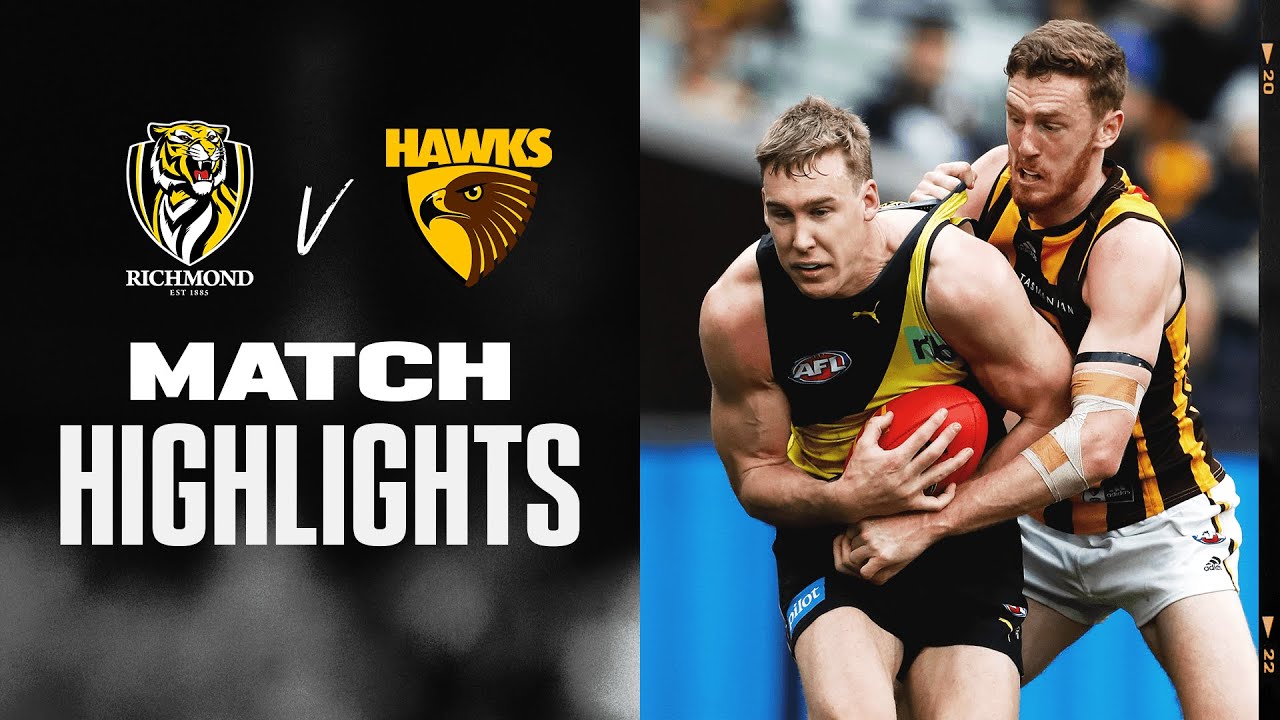 Sydney ended Collingwood’s 11-game unbeaten run, defeating them 77-50 on Sunday afternoon.
It was Sydney with the upper hand early, kicking four goals to two in the openning quarter, leading 28-15 at quarter time. Both sides added a goal each in the second, as Sydney took a 37-22 half time lead.
It was a tight third quarter, with Sydney kicking four goals to three to lead 64-41 at three quarter time. The Swans controlled the last quarter, kicking two goals to one to run out 27-point winners.
Sydney moved into second position with win number 15 for the season. If they can beat St Kilda at Marvel next Sunday, they should secure second spot. Collingwood have the chance to secure a spot in the top four if they can beat Carlton next Sunday, in a do or die clash for Carlton. The consequences of a loss to Carlton next Sunday, means Collingwood can drop to as low as sixth depending on other results. 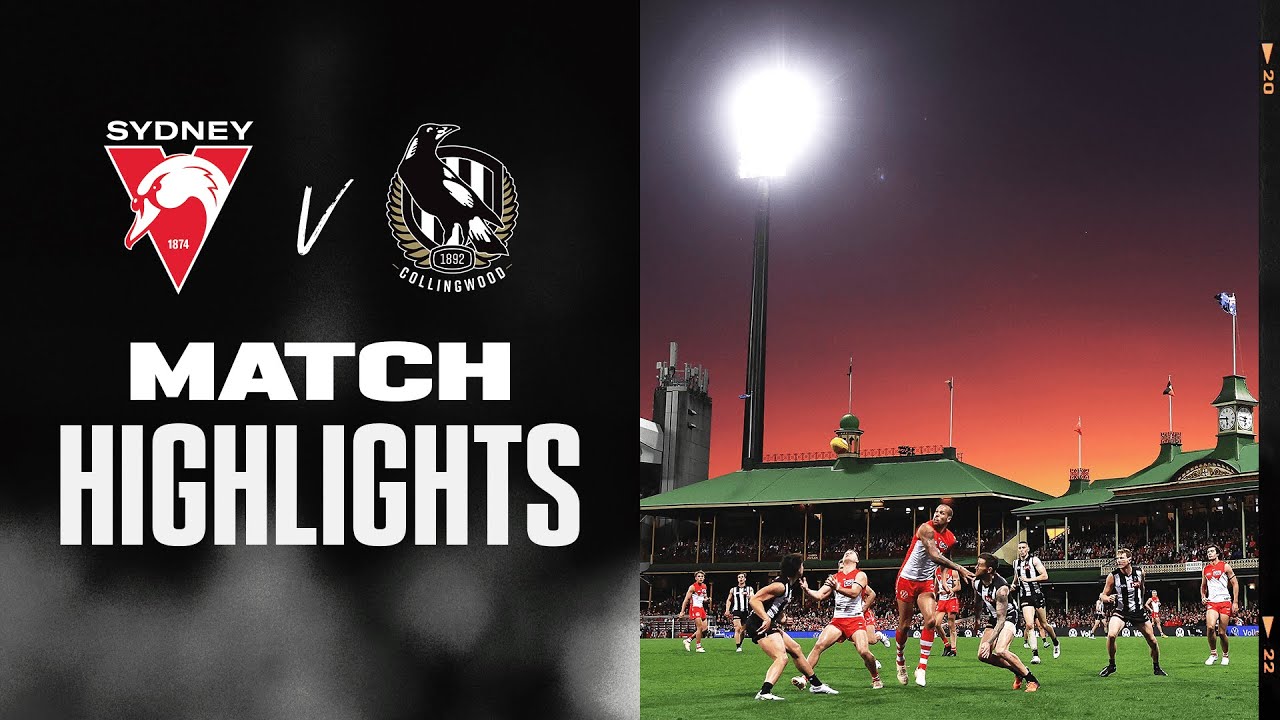 Port Adelaide destroyed Essendon 146-62 on Sunday evening.
Port started strongly, kicking five goals to three in the openning quarter to lead 30-22 at quarter time. Essendon had a Power outage in the second quarter, as Port piled on the only seven goals to run out to a 74-23 half time lead.
Essendon had a bit of a better third quarter, kicking three goals to two as Port took a 90-41 three quarter time lead. The Power stood up again massively in the last quarter, kicking eight goals to three to absolutely blow Essendon out of the water by 82-points in the end.
Port’s ninth win of the year moves them into 12th position. They will round out their season when they host Adelaide in the showdown next Saturday night. Essendon will round out their horror season against Richmond on Saturday night. 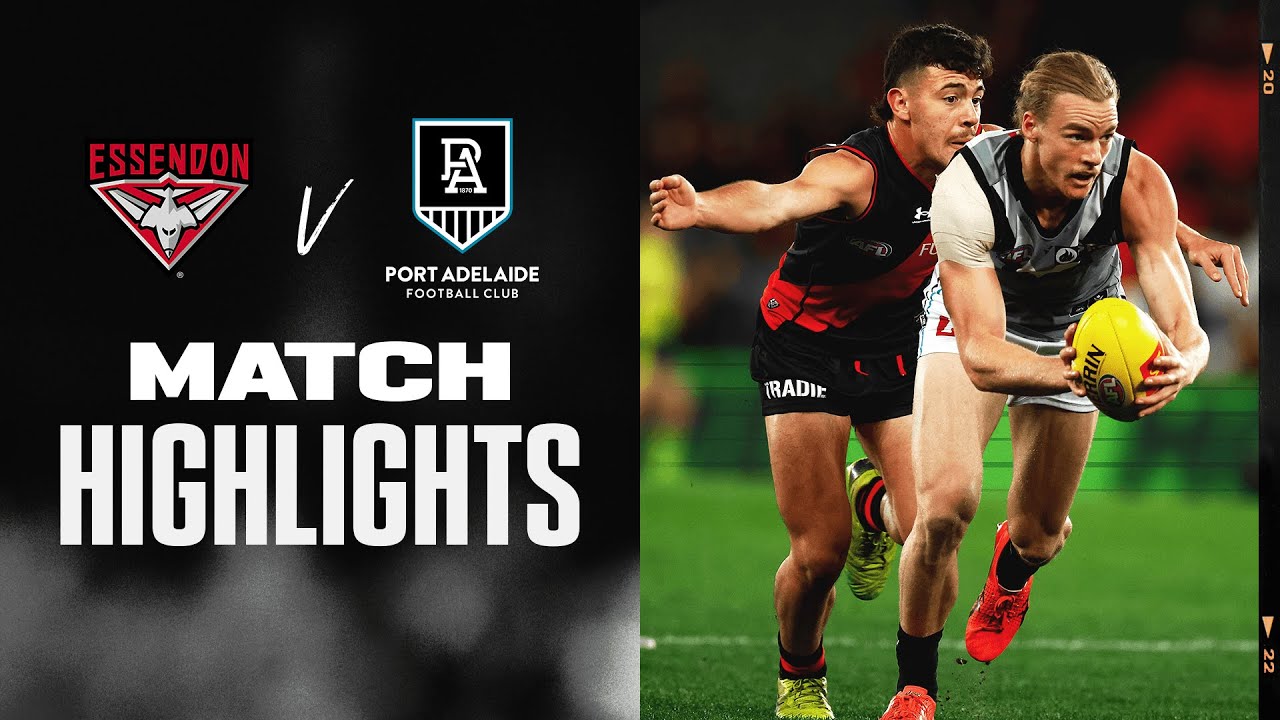