The Brisbane Lions held off a strong challenge from Collingwood to win by 7-points on Thursday night at the Gabba.

Collingwood made the positive start kicking five goals to three in the opening quarter, taking at 12–point lead into quarter time. The lions went on to dominate the second quarter, kicking the opening six goals to regain control. Two late Collingwood goals reduced the halftime margin back to 13-points.

The lions remained in control in the third quarter, kicking three goals to two, with Nathan Kreuger’s late goal bringing the margin back to 18-points at the final change. Zac Bailey got the opening goal of the last quarter. Collingwood gave themselves a chance again with the next two goals. Goals from Joe Daniher and Daniel McStay ensured a Lions victory. Collingwood pulled back the last three goals of the game in junk time, as Darcy Moore marked played on and kicked a goal ride on the final siren to reduce the final margin to seven points. 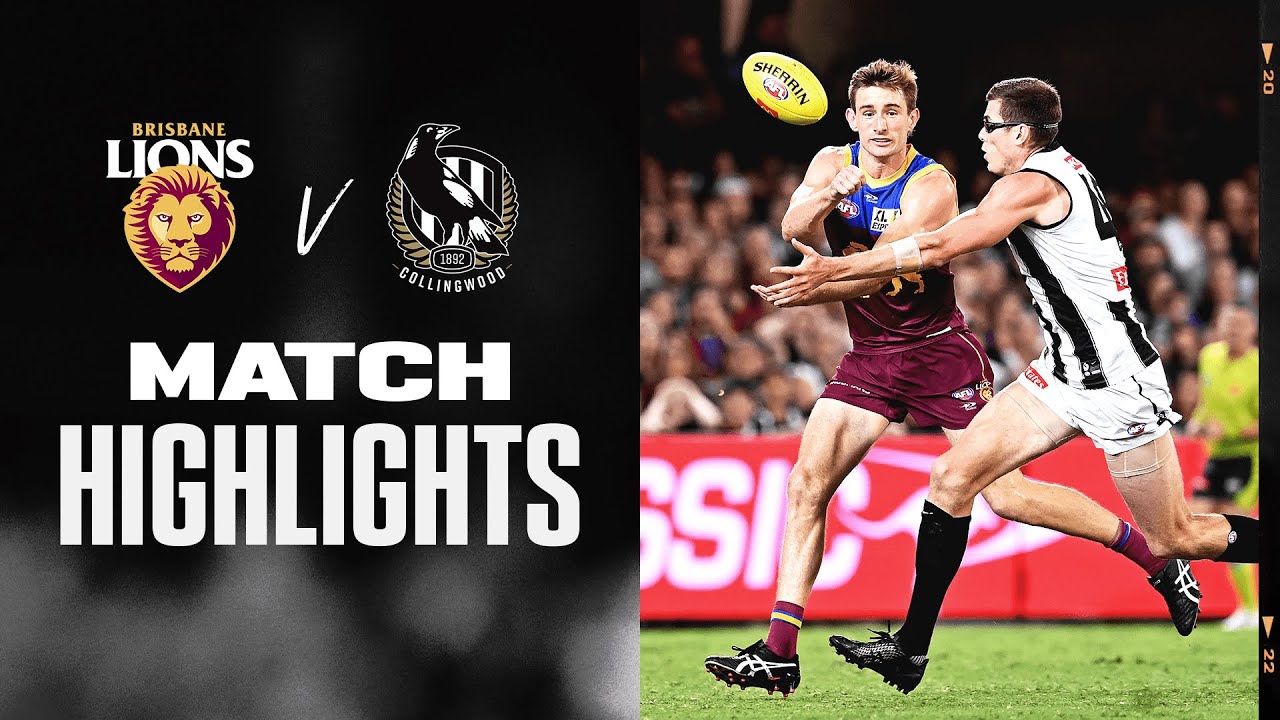 The Bulldogs made a hot start, piling on the first five goals. North got on the board through Jaidyn Stephenson. Before the dogs kicked away again with the final three goals of the quarter through Cody Weightman, who kicked four individual goals in the first quarter. As the Dogs blew the quarter time margin out to 47-points. The Dogs got the opening goal of the second quarter, before North went on a rampage, piling on the next five goals to bring it back to a four goal ball game. An Aaron Naughton steadier got the Dogs back out to a 26-point half time lead.

The Dogs are back on the winners list after their shaky start to the season, and will definitely look to gain some confidence following this big win. They will look to continue winning form when they host the Adelaide crows on Saturday afternoon. It does not get any easier for North Melbourne, they face Geelong on Sunday. 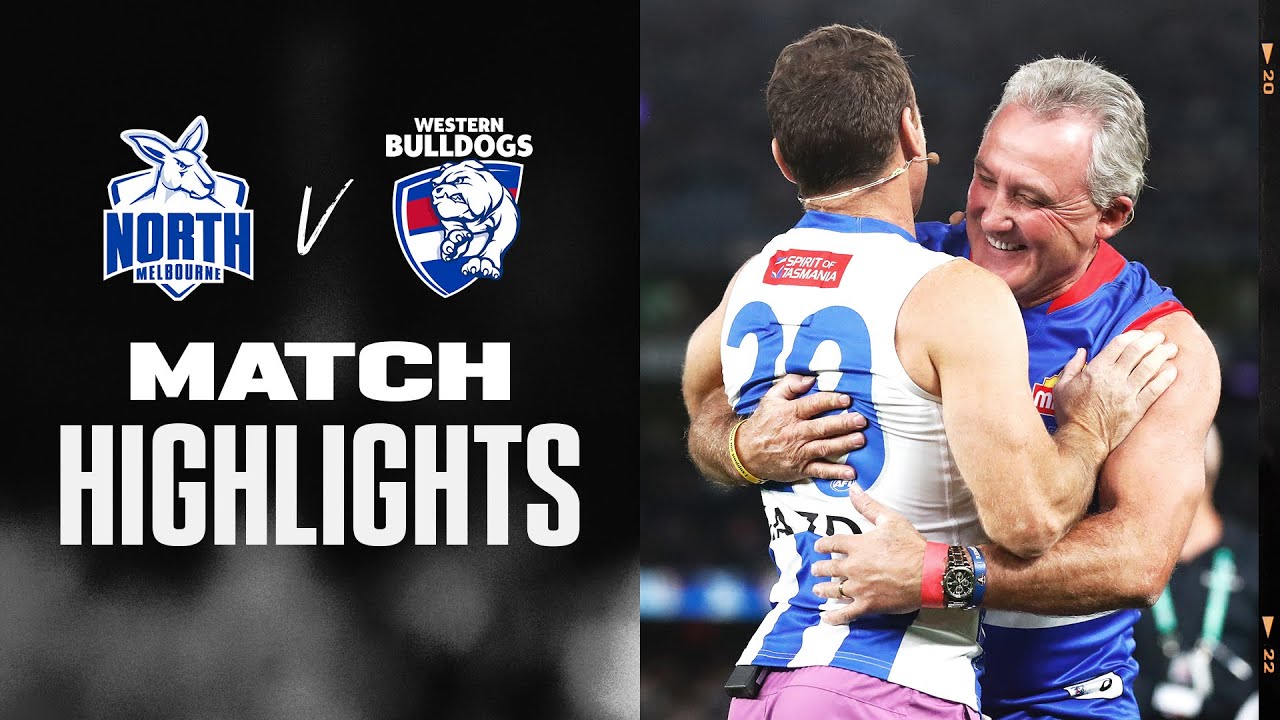 West Coast had a better third term, kicking two goals and keeping Sydney to only one. As the Swans took a 51-point three quarter time lead. The Swans put the foot back on the pedal in a high-scoring last quarter, kicking seven goals to five, as they ran out big winners by 63-points in the end.

West Coasts horror start to 2022 continues, they are only one win from five games. They have a chance to rebound when they face a bottom placed, winless Port Adelaide in Adelaide next Saturday. Sydney kept their place in the top 8 with win number four, percentage only outside the top 4. They will look to continue winning form, with their clash in Tasmania against Hawthorn on Anzac Day. 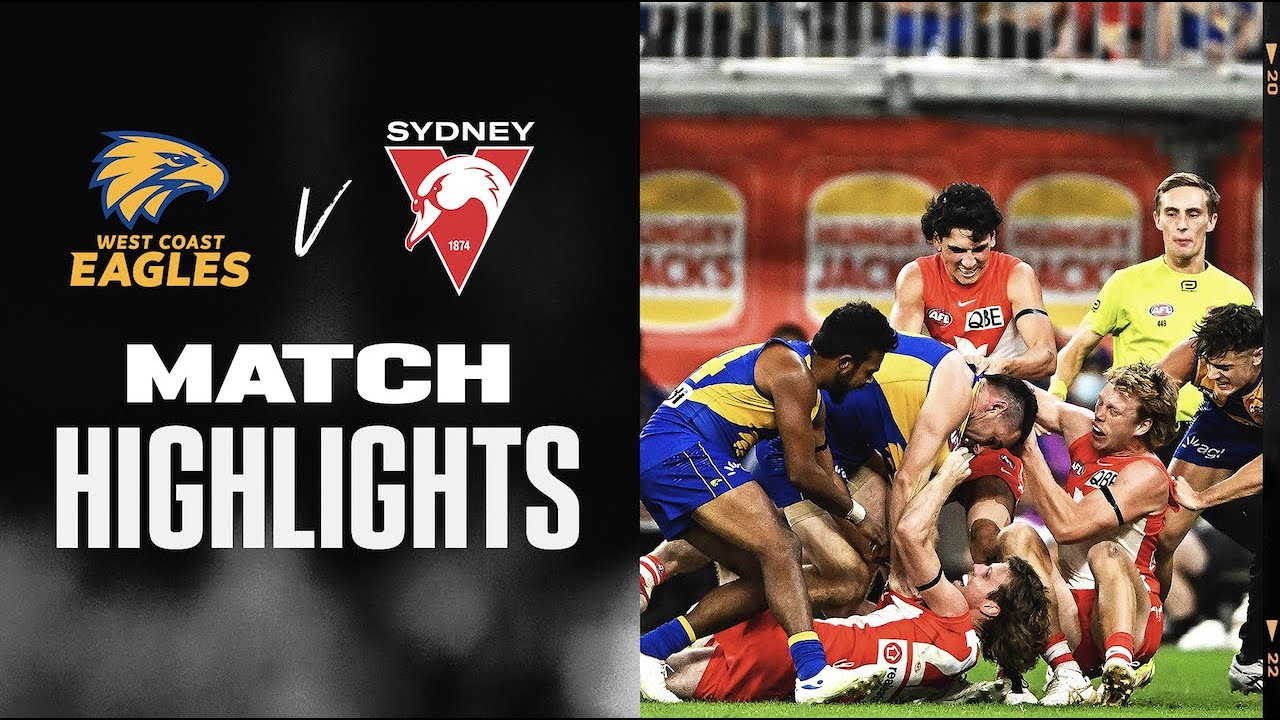 The Saints took care of the Gold Coast on Saturday afternoon at Marvel Stadium by 26-points. Jack Higgens with a day out kicking five goals.

The Saints gained control in the third quarter, kicking three goals to two, leading by 14-points at the final change. Running away with it in the end, kicking four goals to two to run out 26-point winners and remain in the top 4. This season is alive and kicking for the Saints and they are marking themselves as a potential flag contender early.

St Kilda will look to continue winning form when they travel to face Greater Western Sydney (GWS) on Friday night. Gold Coast face a tough challenge in the Brisbane Lions on Saturday. 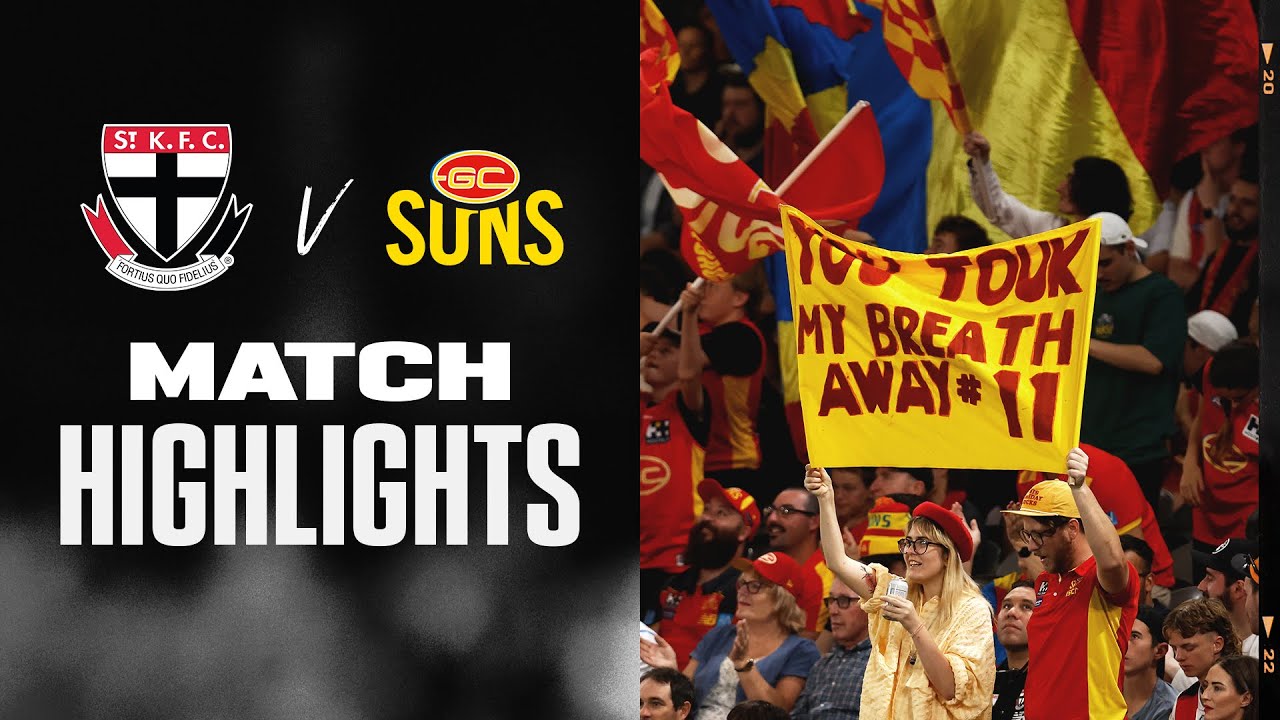 Adelaide achieved a huge result, with a 19-point win over Richmond at Adelaide oval on Saturday afternoon.

Elliot Himmelberg got his third for the day with a snap from the pocket, as Adelaide grew their lead to 25-points. Back the Tigers came in quick succession, as they piled on four goals in a row, with Liam Baker putting them a point in front incredibly, with a goal from the pocket. Adelaide then went on to kick the final three goals on the quarter and take a 24-point lead into the final change. Josh Rachele kicked the opening two goals in the last quarter for the crows, as they ran away to a 31–point lead and wrapped up the win. Two goals from Richmond bought the final margin back to 19–points. As Adelaide won a huge confidence boosting game for the club.

Adelaide face a challenge in the Bulldogs on Saturday afternoon. Richmond face an even bigger challenge against the undefeated, top of the table Melbourne on Sunday night in the Anzac Eve clash at the MCG. 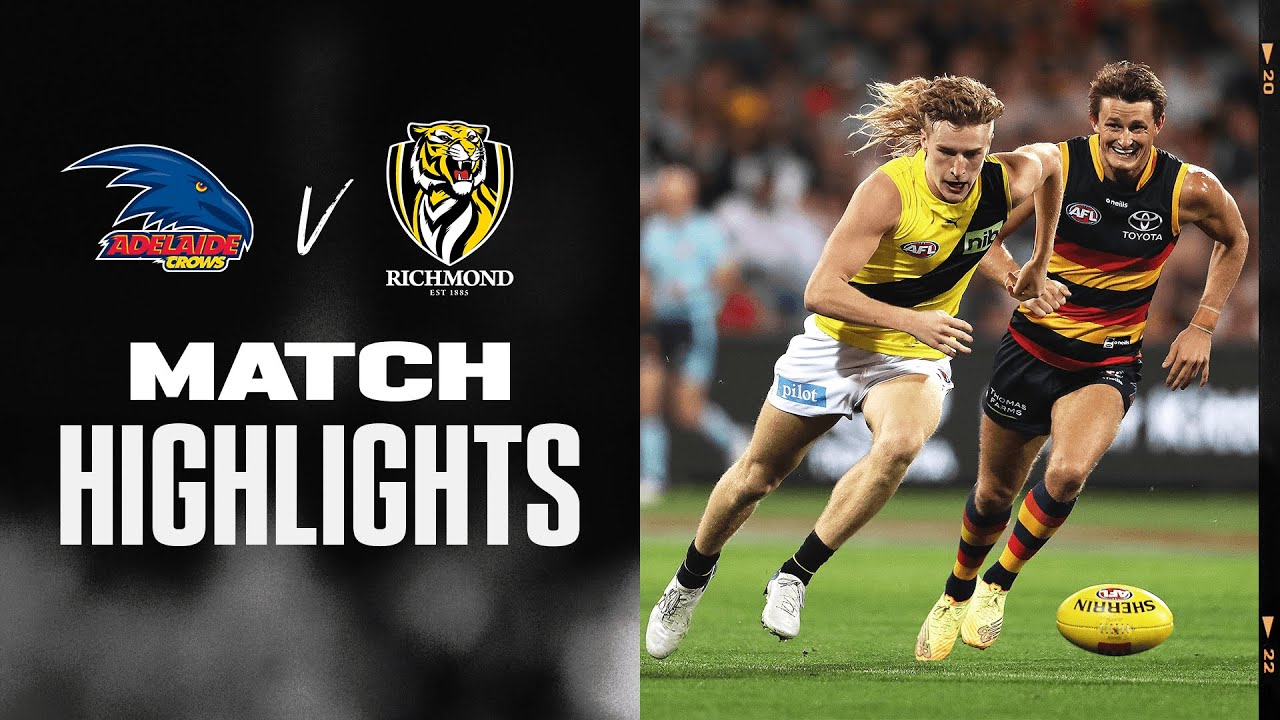 Melbourne demolished GWS at the MCG on Saturday night by 67-points.

Melbourne started strongly, kicking the only four goals of the first quarter to lead by 17 – points at the first change. GWS worked their way back into the game in the Second quarter, kicking three goals to two and reducing the halftime margin back to 16-points.

The Demons exploded in the third quarter, kicking a remarkable 10 goals to two, as they blew the three-quarter time margin out to 62-points. They controlled the last quarter as well, kicking three goals to two to run out 67-point winners, and remain the only undefeated side after five rounds at the top of the ladder.

Melbourne look forward to seeing if they can make it six out of six when they play Richmond in the ANZAC eve clash on Sunday night. GWS face a big challenge in the inform St Kilda on Friday night. 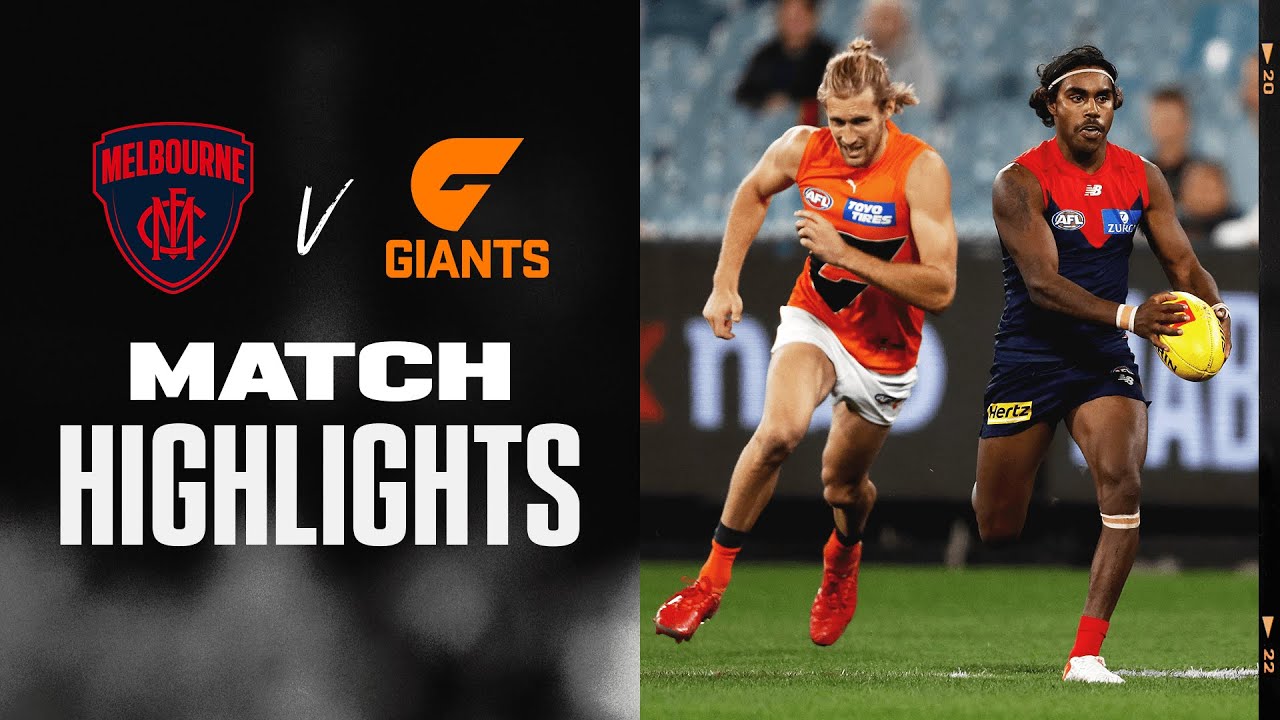 Carlton survived a remarkable 50 point come back from Port Adelaide, to hold on by three points for their fourth win of season 2022.

Port Adelaide sent a scarce through the Carlton camp in the third quarter. After Port got the first two goals of the third quarter, Charlie Curnow responded with his fourth for the day. It was all Port Adelaide from there as they kicked the last four goals of the quarter to really claw their way back into it, with the three-quarter time margin a remarkably back to 17 points, as Ports six goal to one quarter put them back in touching distance in a game where they looked gone for all money being 50-points down. Goals from Sam Powell–Pepper and Robbie Grey brought the margin back to two points as shockwaves were sent around the MCG. But who else but Curnow to then bob up and mark inside 50 for the Blues, go back, kick his fifth and get the Blues back out by nine points, in a game saving goal. Port threw one last role of the dice, Mitch Georgiadies with a snap round the corner got the Power back within three again. A Zac Fisher miss gave Port one last role, as Karl Amon marked 50 out with a minute remaining. His kick didn’t make the distance as the Blues rushed a behind through with a little over 30 seconds left. Harry McKay stood tall and marked and sent the ball along the line and out of bounds, as the siren sounded to very relieved Carlton players and fans. The final margin 3-points, in a Sunday thriller.

Port almost pulled off the biggest comeback of the season, but Michael Vosses young men are learning to hold out games, even when teams throw everything at them, which is the main thing. The next step however for the Blues development however, is to learn to put sides away when they have big leads, as that will make it a lot easier for them. They need to learn to be a bit more clinical and ruthless. Carlton face a challenge in Fremantle away on Saturday night. Port have a chance for their first win of season 2022 when they host the West Coast Eagles on Saturday afternoon. 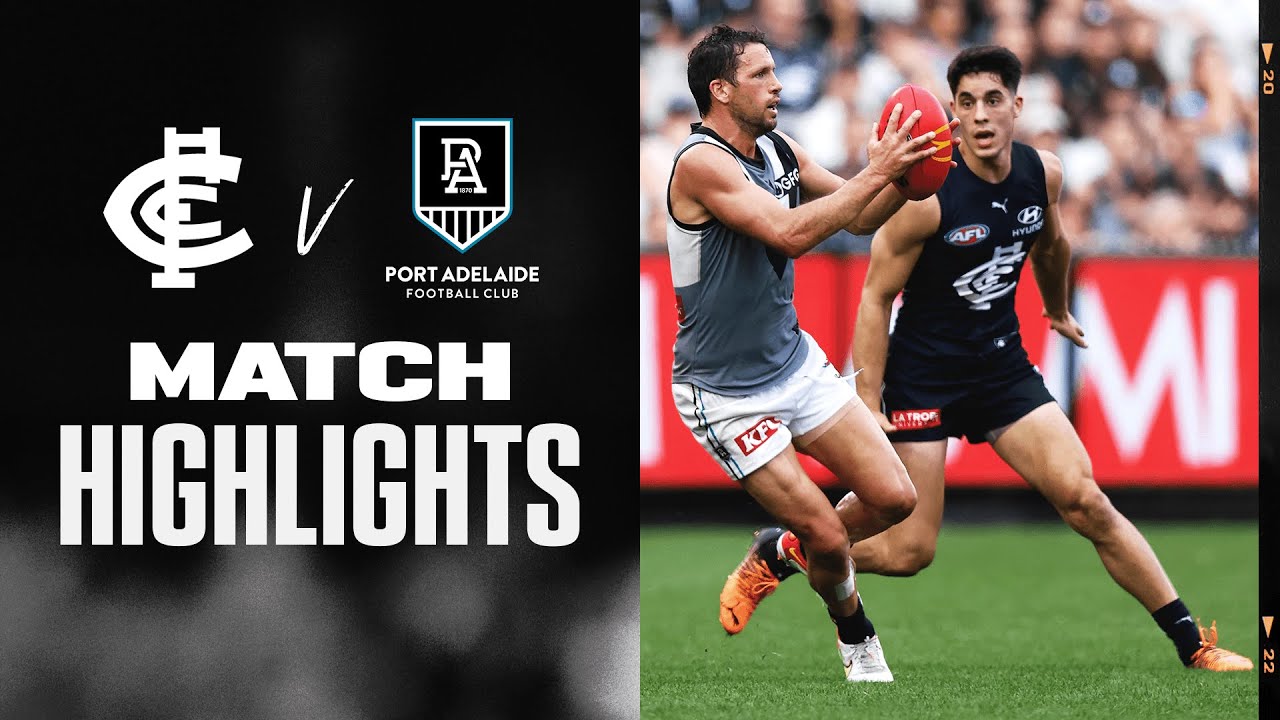 Fremantle moved to second on the table, following a 48 point win over Essendon at Marvel Stadium on Sunday afternoon.

Fremantle started positively, kicking two goals to one in the opening quarter to lead by four-points at quarter time. Both sides kick for goals a piece in the second quarter, with Fremantle leading by three-points at the half.

Fremantle went on a rampage in the third quarter, piling on six goals to none and getting out to a whopping 40-point lead ath the final change. Despite Essendon kicking the first three in the last quarter, the Dockers responded with the next four to run away by 48 points in the end.

This win lifting Fremantle to second place. They have won four from five in an expected remarkable start to season 2022. Fremantle will look to continue winning form when they host Carlton on Saturday night. It does not get any easier for the Bombers, next up their Anzac Day clash with the Pies at the MCG on Monday afternoon. 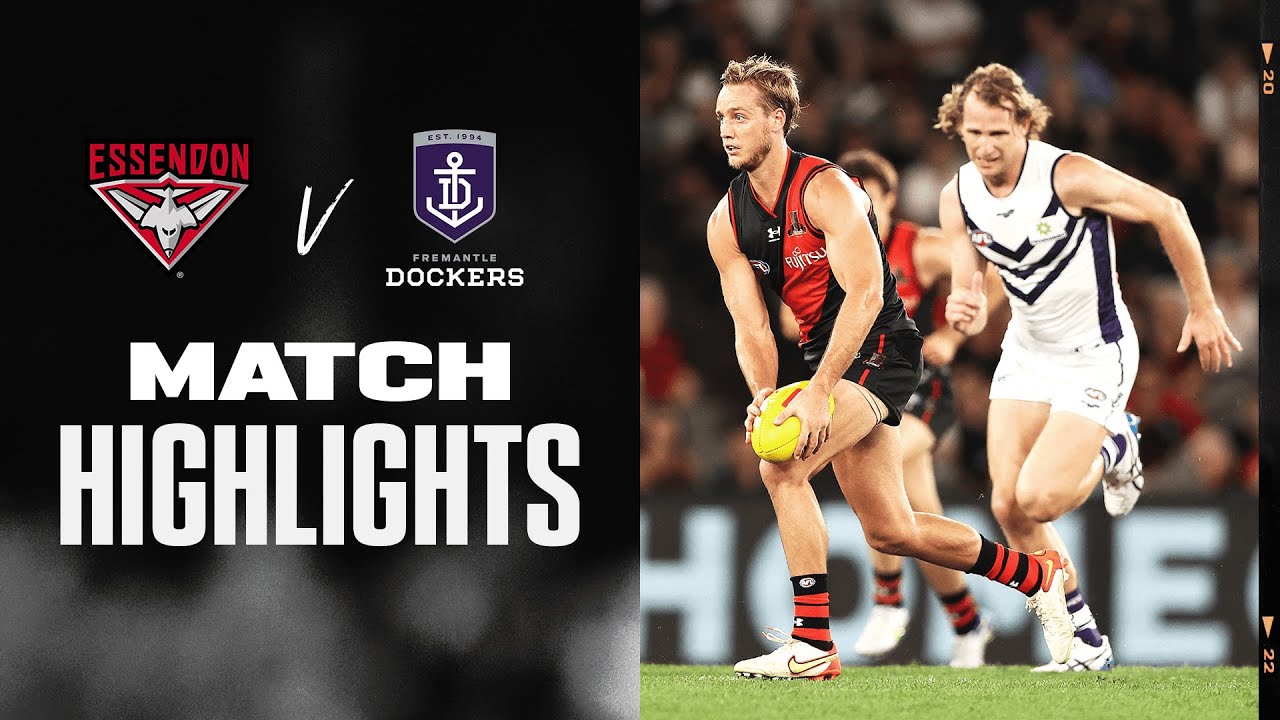 Hawthorn defeated Geelong in an Easter Monday classic by 12-points at the MCG. They kicked the only four goals of the last quarter to come from behind and snatch the wind over their arch rivals.

Hawthorn stuned Geelong early, kicking five goals to one in the opening quarter, leading by 23-points at quarter time. Geelong kicked three out of the first four goals of the second quarter to get themselves back in it. Goals from Jack Gunston and a fourth goal from Dylan Moore extended Hawthorns lead back out to 21. Patrick Dangerfield got his first for the day, before Tom Hawkins marked and from a tight angle kicked the goal on the halftime siren to reduce the margin back to 10-points with the momentum swinging in Geelong’s favour at the half.

Geelong grabbed the lead with the opening three goals of the half, as they led by eight points. Goals from Jack Gunston and Mitch Lewis regained the lead for the Hawks. Tyson Stengle and Jeremy Cameron got the Cats back in control with two goals, as they took an 12-point lead into the final change. Tom Mitchell got the opening goal of the last quarter, before Gunston snap a beauty to put Hawthorn a point in front. Luke Breust marked in the pocket and snapped Hawthorn into a seven point lead with just a little over five minutes remaining. Hawthorn lead by a straight kick with a minute and a half remaning, as Breust launched a long ball to the free Lewis inside 50, as he ran into the open goal for his third and delivered the knockout blow for the Hawks.

The final siren rang around the MCG to delirious Hawks fans and players, as their 12-point upset over their arch rivals elevated Hawthorn into eighth position, a third win for Sam Mitchell after a big upset. Things are progressing well for the Hawks in their new era under Mitchell. Hawthorn will look to continue winning form when they host the Sydney Swans in Tasmania on Anzac Day. Geelong will look to rebound when they face North Melbourne at bloodstone arena on Sunday. 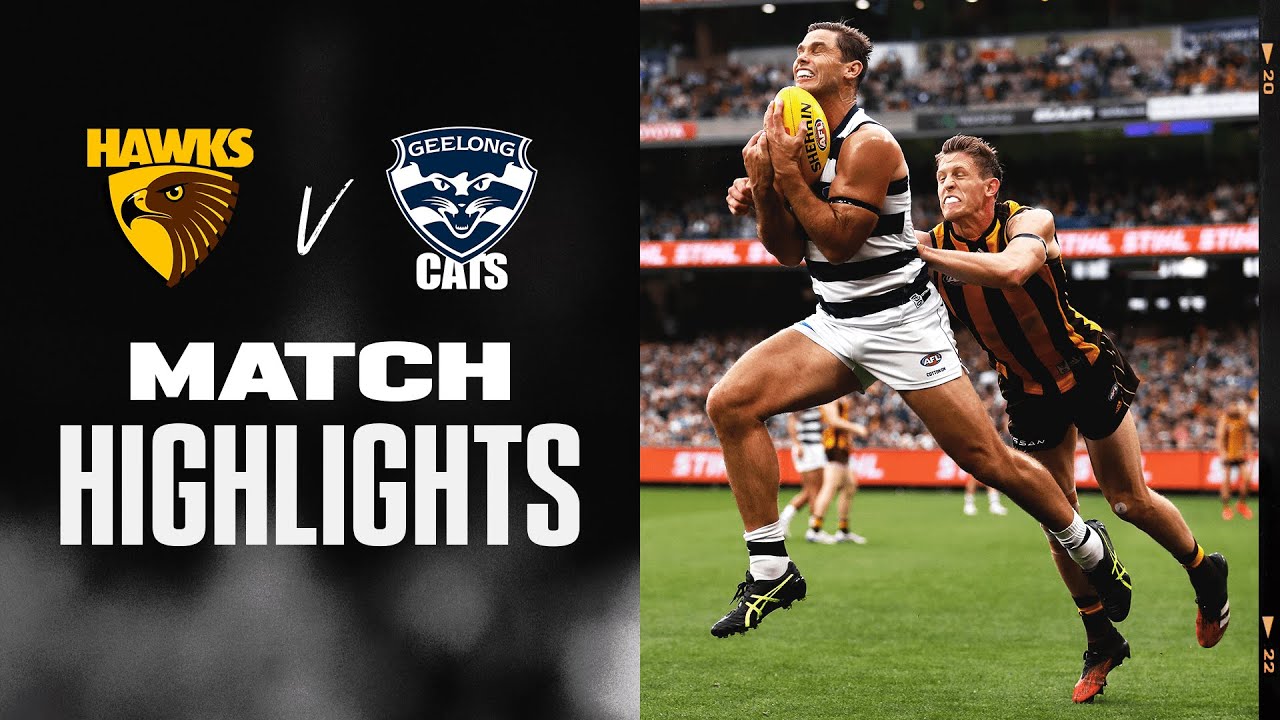