Richmond destroyed the West Coast Eagles by a whopping 109-points on Friday night in Perth.

Richmond were out of the blocks early, kicking seven goals to one in the first quarter, leading 45–8 at quarter time. They continued the form in the second quarter and kicked five goals to one, extending the half time lead to 79-16.

Richmond dominated the premiership quarter, kicking six goals to two, setting up a 119-31 three quarter time lead. They were relentless in the last quarter the Tigers, as they piled on seven goals to four, running out winners 165-56. Causing major headache’s for Adam Simpson. Tom Lynch a star with seven goals.

Richmond face a huge clash with Collingwood at the MCG on Saturday afternoon. For the Eagles, it does not get any easier when they travel to face the second placed Brisbane Lions on Saturday night. 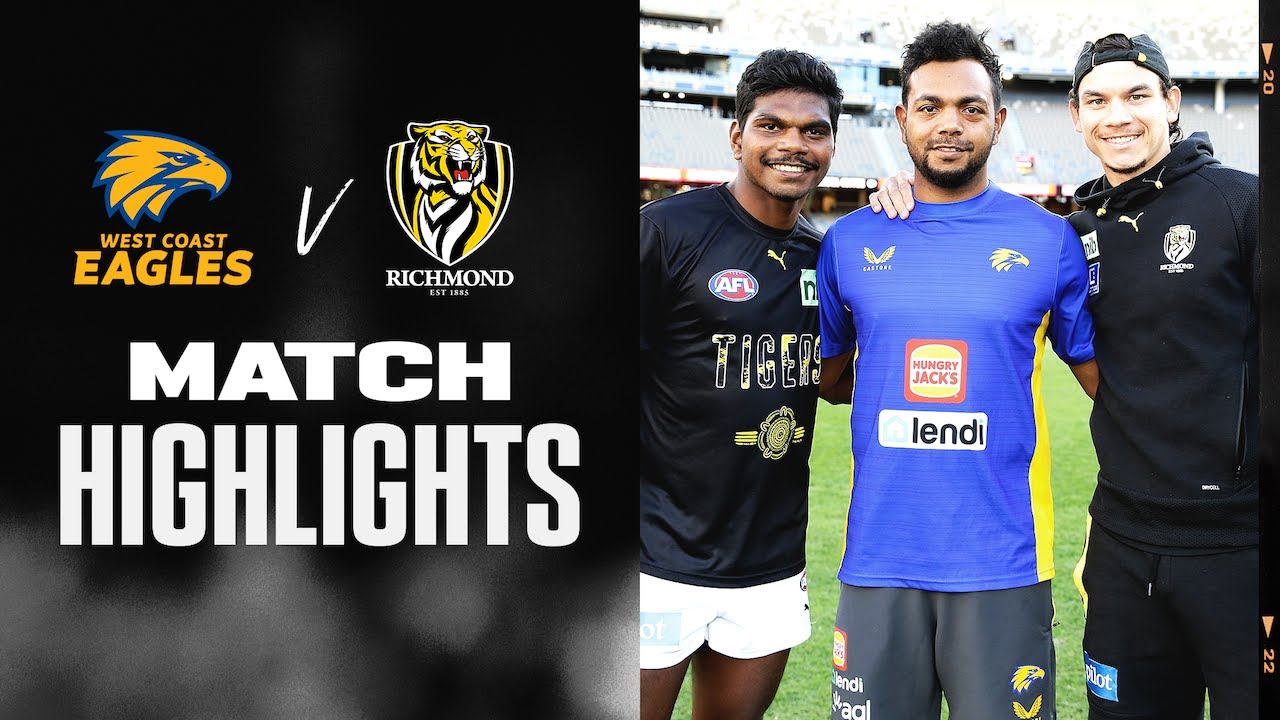 Fremantle held on in an absolute classic against Geelong by 3-points on Saturday afternoon.

Despite a last quarter comeback attempt, the Dockers were good enough to hold firm. The Cats were out of the blocks early, kicking five goals to three in the opening quarter, including the openning three goals of the game. It was the Cats leading 30-21 at the first change. Fremantle got the only goal of the second quarter, as the teams went in level at 31 at half time.

Fremantle dominated the premiership quarter, piling on four goals to one and took a 17-point lead into the final change. Lachie Schultz gave Fremantle a 23-point lead at the start of the last quarter. Geelong pulled back the next two. Before Michael Fredrick restored Fremantle a 15-point lead with a little over five and a half remaining. Tyson Stengle and Mark Blicavs drew Geelong back within 3-points late, but it was too late. As Fremantle held on for a most memorable win on the road in Geelong.

Fremantle have proven themselves genuine contenders in season 2022, sitting 5-1 in third position. They will almost certainly continue this form when they host North Melbourne on Friday night. Geelong will look to rebound when they travel to face Greater Western Sydney (GWS) on Saturday afternoon. 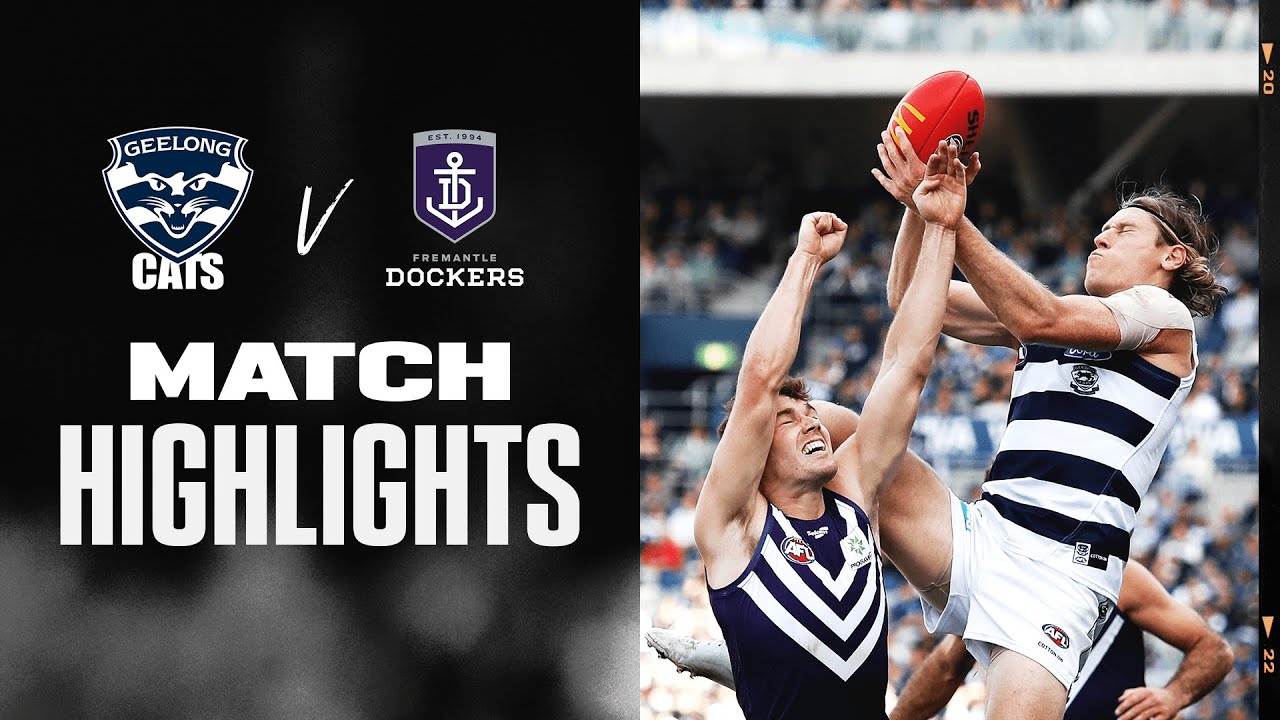 GWS smashed Adelaide on their home turf by 59-points on Saturday afternoon.

GWS were out of the blocks early, kicking five goals to one, at took a 34-7 quarter time lead. GWS used the second quarter to blow the game out the water, kicking six goals to one and took a 74-15 half time lead.

The Giants maintained control in the third quarter, kicking three goals to one, extending their three quarter time lead to 94-22. GWS clocked off a little in the last quarter, conceding five goals, but still kicking three of their own, running out 59-point winners, with their second win of the season.

GWS face an interesting challenge in Geelong next Saturday afternoon. For Adelaide, it doesn’t get any easier when they travel to face the in form Carlton on Sunday evening.

Melbourne started their season 7-0 with a hard fought 10-point win over Hawthorn on Saturday afternoon.

The Hawks started brightly, kicking three of the first four goals, before a late Melbourne rally of two goals brought the margin back to two at quarter time. Melbourne controlled the second quarter, kicking four goals to two and took a 47-38 half time lead.

The premiership quarter truly belonged to the Dees, as they piled on six goals to three and took a 87-59 lead at the final change. Despites the efforts of the Hawks from goals in the last quarter to Tom Mitchell, James Worpel and Jacob Koschitzke, it was not enough. The Dees were goalless in the last quarter, but did well enough through to second and third quarters to set up a 10-point win.

The Hawks can take plenty of solos from this defeat however. They will face Essendon on Saturday night with a big chance to rebound. Melbourne face quite possibly their biggest test yet, when they host St Kilda at the MCG on Sunday. 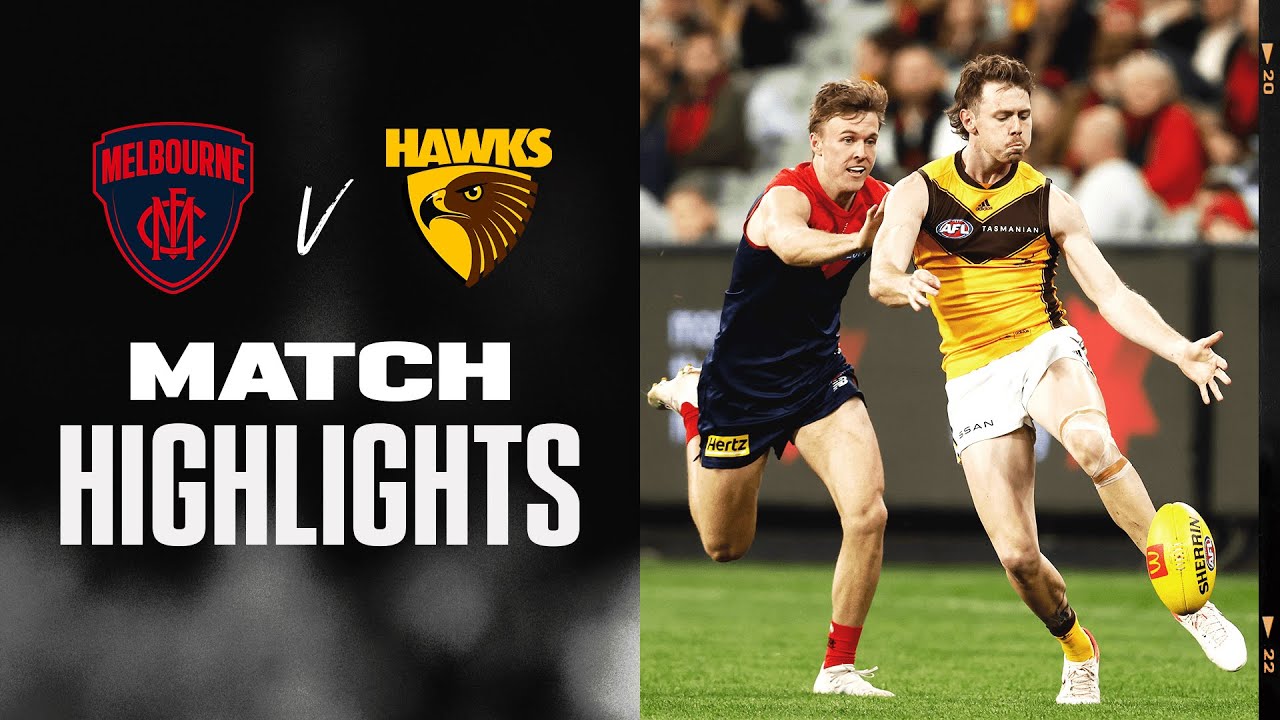 Carlton continued its in form start to season 2022, taking care of North Melbourne by 50-points on Saturday night.

Jack Caroll got his career off to a bright start, with his first kick in footy being the openning goal of the game, as Carlton players rallied around him. The Blues went on to dominate the openning quarter, kicking five goals to two, leading 32-15 at quarter time. North came out firing in the second quarter, kicking the openning three goals to draw level. Harry Mckay responded for the Blues with a strong mark and goal. Luke Davies-Uniacke responded for North and we were level again. The Blues took control with the next two goals, before a Josh Mahony goal right before half time reduce the margin back to eight-points.

The Blues took the game by the scruff of the neck in the premiership quarter, piling on seven goals to two. Setting up a 98-58 point three quarter time lead, with Jacob Weitering kicking his first goal since 2018 late in the quarter. Carlton kicked two goals to one in the last quarter, as Patrick Cripps and McKay ensured a 50-point win for the Blues.

Carltons fifth win of the year shows they’re really on the right path, they have won all their home games so far. It is very pleasing for Blues fans, especially that they were able to put a side away finally, after many close games where they had big leads. Carlton will look continue impressive form when they host Adelaide next Sunday evening. For North, it gets no easier when they travel to face the in form Fremantle on Friday night. 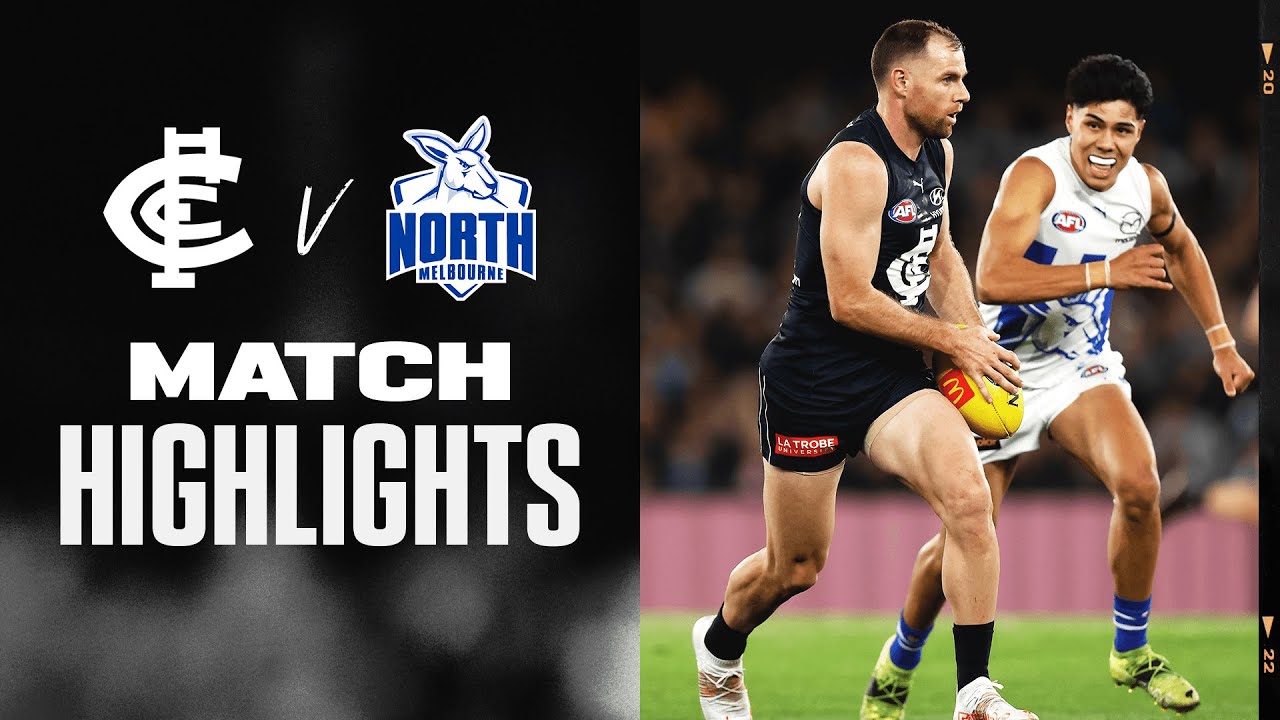 Port Adelaide defeated St Kilda by a point on Saturday night, in one of the upsets of the season.

With the scores level with under a minute left, Robbie Grey’s behind would prove the winning point.

The Saints started the better, kicking two goals to one in the first quarter and leading by 13-points at quarter time. After Jack Higgins got the opening goal of the second quarter, Ollie Wines got Ports first. As the Saints took a 24-10 half time lead.

Port the game in the premiership quarter, kicking the only three goals, to seven consecutive behinds. As St Kilda held on to a one-point three quarter time lead. Max King got the openning goal of the last quarter. Todd Marshall drew Port Adelaide back within two points. With the scores level late at 41 apiece, King couldn’t mark and it was rushed through for the Saints. Zak Butters snapped a point and we were all tied up with 1:40 to play. Robbie Grey picked it up and snapped a point through from the boundary with 32 seconds left on the clock, the behind Porting Port in front by a point. It would be all they needed, as Grey marked again with only second remaining on 50, chipped it short to Todd Marshall as the siren sounded, Port with a one-point stunning upset over one of the flag contenders, in a low scoring, hard hitting affair.

It was a really poor start to the season for Port, but they have bounced back with two consecutive wins, this one over the Saints who had only lost once to this point could no doubt give them pleanty of hope to play out the season really well from this point. Port face an interesting challenge when they host the Bulldogs on Friday night. St Kilda face an even bigger challenge in the undefeated Melbourne on Sunday afternoon. 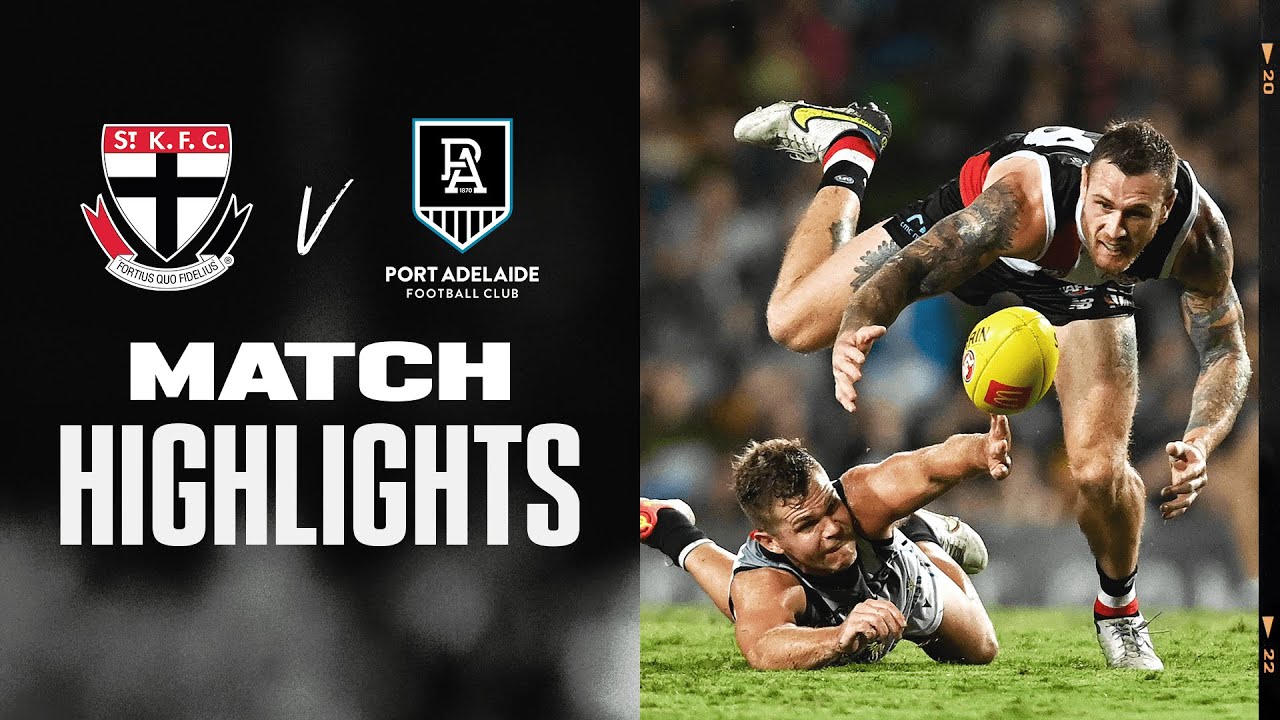 Collingwood took care of the Suns by 25-points on Sunday.

They were out firing early, kicking seven goals to three in the openning quarter to set up a 26-point quarter time lead. It was a high scoring second quarter with Gold Coast kicking five goals to four, as Collingwood led at half time by 71-50. 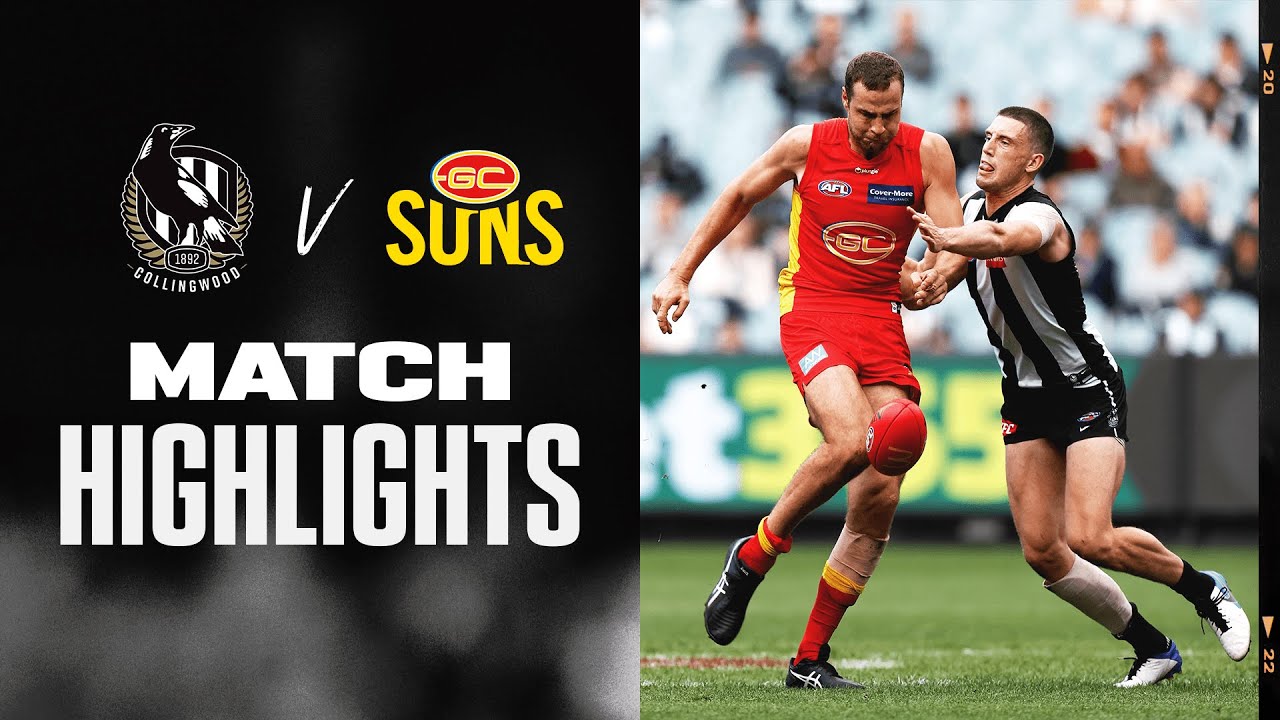 The Bulldogs took care of Essendon by 32-points at Marvel Stadium on Sunday afternoon.

The Dogs dominated the premiership quarter, kicking seven goals to three and set up a massive 82-46. The Dogs kicked three of the first four goals of the last quarter to blow out the margin, but Essendon got the last three goals of the game to reduce the final margin to 32-points. But the Dogs were overall dominant and look to be working their way back towards the top 8.

The Dogs will look to continue this form when they travel to face Port Adelaide on Friday night. Essendon face another tough challenge in the upcoming Hawks on Saturday night. 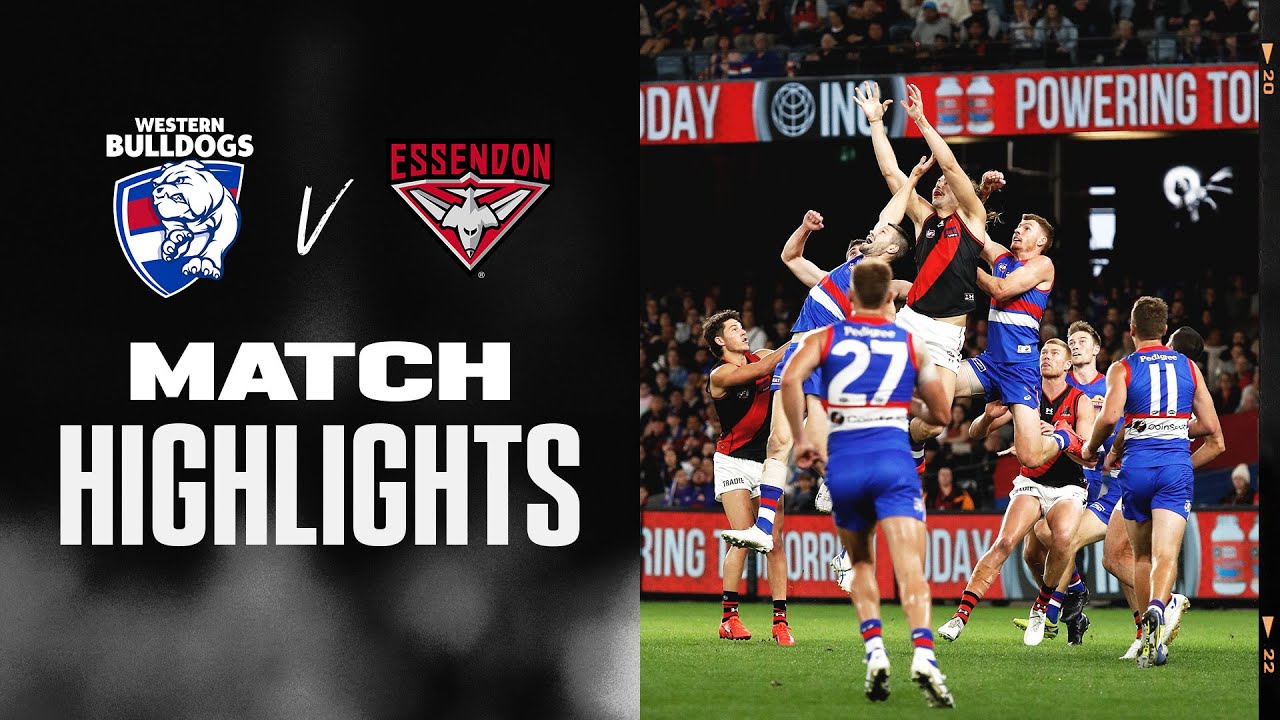 The Brisbane Lions defeated the Swans in Sydney by 24-points on Sunday night to climb to second spot on the ladder.

Both sides got one goal in each the first quarter, with the sides level at nine apiece at quarter time. The Lions went on a rampage in the second quarter, piling on five goals to one to set up a 49-16 point half time lead.

Sydney made an attempteed comeback in the third quarter, kicking the openning five goals to get back within three-points. Brisbane then responded with the next five goals to restore a 35-point lead. Callum Mills pulled one back for Sydney after the three quarter time siren to bring the margin to 29-points. Both sides kicked five goals each in the last quarter, as Brisbane held out by 24-points in the end, running out 113-89 point winners, in their first win at the SCG since 2009.

Brisbane sit second only behind Melbourne, they are looking red hot contenders in season 2022. They will host the bottom placed West Coast on Saturday night with a massive chance to get a percentage boosting win. Sydney will look to rebound when they host the Gold Coast Suns on Saturday afternoon. 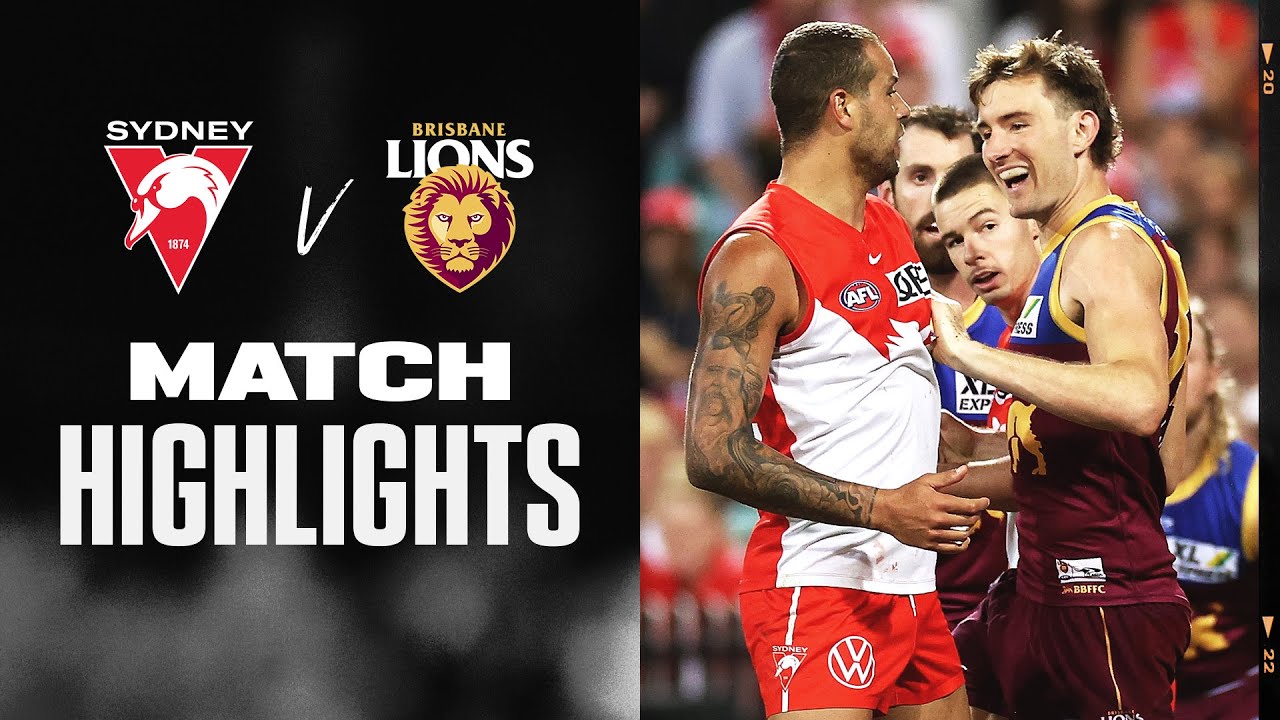