The Western Bulldogs got back on the winners list, following a 99-51 point win over Collingwood on Friday night at Marvel Stadium.

The Dogs were out of the blocks early, kicking the openning six goals of the game, before Jack Crisp finally got Collingwood on the board late in the quarter, as the Dogs took a 41-9 quarter time lead. Brody Mihocek pulled back Collingwood’s second in a row, before Aaron Naughton replied for the Dogs, as they took a 52-18 half time lead.

The Dogs remained in control in the third quarter and kicked four goals to two, and set up a 77-31 three quarter time lead. Collingwood had some slight belief, after kicking the oppening three goals of the last quarter to reduce the margin back to 27. But the Dogs would not let them back, and kicked the last three goals to run away with it in the end by 48-points. Their season is back alive well and truely, sitting one game out of the top 8.

The Dogs will look to continue winning form when they face Gold Coast on Saturday. Collingwood face a tough challenge in Fremantle away on Sunday night.

Richmond survived a challenge from Hawthorn to win by 23-points on Saturday afternoon.

It was a hot contested first quarter, with Hawthorn kicking four goals to three to set up a 28-21 quarter time lead. The Hawks got out to a 25-point lead at the start of the second quarter, before Richmond pulled back the next four. Mitch Lewis kicked a steadier for the Hawks, before goals from Shai Bolton and Ivan Soldo gave Richmond a 59-53 half time lead.

It was the Tigers premiership quarter to own, as they kicked three goals to one, including a goal of the year contender from Dustin Martin late in the third quarter to set up an 81-62 three quarter time lead. After Luke Breust got the opener of the last quarter, before Richmond kicked the next three. Hawthorn made a serious challenge, kicking four in a row, including two quick goals from Mitch Lewis and James Worpel reduced the margin back to 10-points. Goals from Jason Castagna and Bolton ensured a 23-point win for the Tigers, as they stay a game clear in 8th position.

Richmond will look to make it four on the trot when they face Essendon in the dreamtime match on Saturday night. Hawthorn face a tough challenge in Brisbane in Tasmania on Sunday. 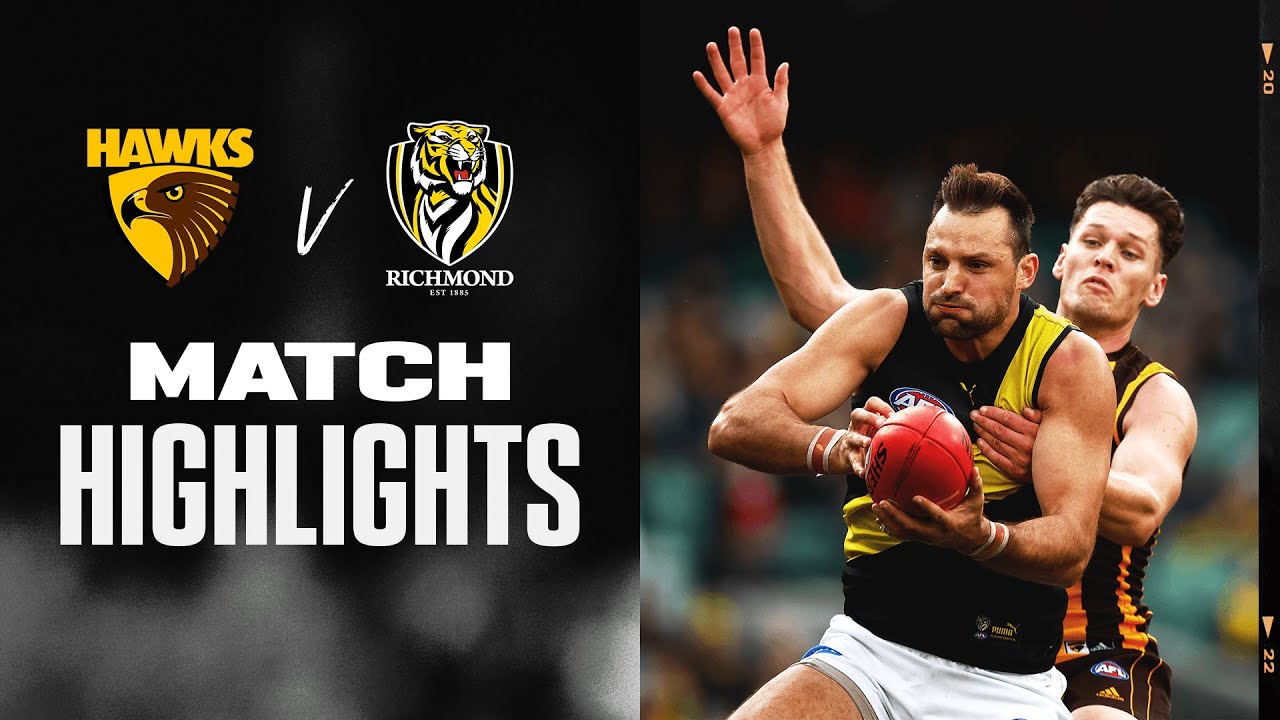 Port Adelaide made it four wins in a row with their 69-point win over North Melbourne.

Port were out of the blocks early kicking six goals to one to set up a 41-9 quarter time lead. Both sides kicked two goals each in the second quarter, as Port took a 56-25 half time lead.

Each side kicked two goals in the third quarter with Port leading 71-39 at the final change. Port kicked the openning five goals of the last quarter, before Tom Powell kicked Norths only goal of the last quarter. Xavier Duursma’s last goal of the game ensured a 69-point win for the Power, making it four in a row and they look a totally new side who can truly believe they can make the eight now, as they sit one game out of the eight nine rounds in.

Port will face a challenge in Geelong next Saturday, but if they can win an upset on the road, itll square the ledger at 5-5. For North, it gets no easier as they face the nine-game unbeaten, top of the table Melbourne at Marvel Stadium on Saturday. 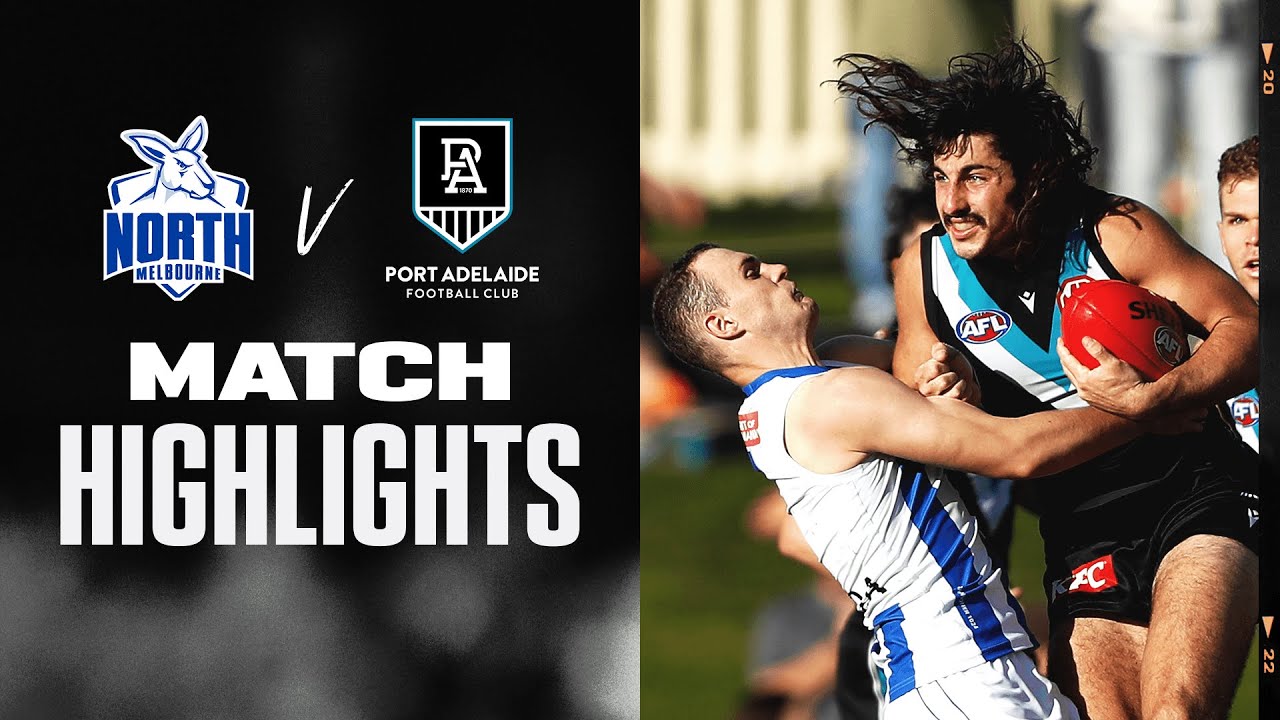 St Kilda came from behind to beat Geelong by 10-points in a thriller at Marvel Stadium on Saturday afternoon. It was a seven goal third quarter to set up the win.

The Cats started brightly, kicking four goals to two in the first quarter to set up a 29-14 quarter time lead. Each side kicked two goals each in the second quarter as the cats took a 44-28 half time lead.

After the Cats got the openning two goals of the third and set up a 22-point lead, it was a Saints rampage, as they piled on the next seven goals and got out to a 74-58 three quarter time lead. Tom Hawkins pulled back two goals for the Cats to start the last quarter as they drew within three-points. Paddy Ryder became the Saints hero, kicking two crucial last quarter goals to put the Saints up by 15-points. Jeremy Cameron pulled one back for the Cats, but it was to little too late, as the Saints held on by 10 for their first win over Geelong since the 2016 season.

Sydney were dominant from the beggining, kicking five goals to two in the opening quarter to set up a 35-15 quarter time lead. The Swans kept the foot on the pedal in the second quarter, kicking four goals to two to take a 66-28 half time lead.

The premership quarter truly belonged to the Swans as they pilled on three goals to one to get out to a 88-37 three quarter time lead. Nic Martin pulled one back for Essendon to start the last quarter, but the Swans got the last two goals of the game to run out winners by 58-points in a dominant display.

Sydney face a very stern test in an inform Carlton on Friday night at Marvel Stadium. Essendon face an even tougher task in Richmond on Saturday night.

Brisbane survived a challenge from the Adelaide Crows to win by 36-points on Saturday night.

Brisbane made a positive start, kicking five goals to two in the first quarter to lead 32-21 at the first change. Adelide really put Brisbane under the pump in the second quarter, as they kicked the openning four goals to set up a 15-point surprising lead. Two late goals to the Lions from Zac Bailey and Jarrod Lyons brought the half time margin back to three-points.

It was the Lions premership quarter as they turned the game on its head. They pilled on six goals to one to set up a 84-56 three quarter time lead. The Lions kicked three goals in the last quarter, Adelaide’s only goal of the last quarter came from James Rowe, as Brisbane ran out 36-point winners for their sixth win of the season, as they six in second position with only one loss after nine rounds.

Brisbane will look to continue this form when they face Hawthorn on Sunday afternoon. Adelaide face a challenge in St Kilda at home on Saturday night.

Gold Coast caused an upset to defeat the red hot Fremantle by 36-points on Sunday afternoon.

Both sides kicked two goals each in the first quarter with Fremantle leading 15-13 at the first change. The Suns started to control the game in the second quarter, kicking the only three goals in the quarter to set up a 35-16 half time lead.

The Suns kept Fremantle goalless again in the third quarter, and kicked the only goal through Noah Anderson, as the Suns took a 44-17 point three quarter time lead. The Suns blew Fremantle away in the last quarter, kicking four goals to two to blow the final  margin out to 69-33.

The Suns fourth win of the year shows they are making improvements this season, they have claimed possibly their biggest scalp yet. They face a big challenge in the Western Bulldogs next Saturday. Fremantle will look to rebound when they host Collingwood on Sunday. 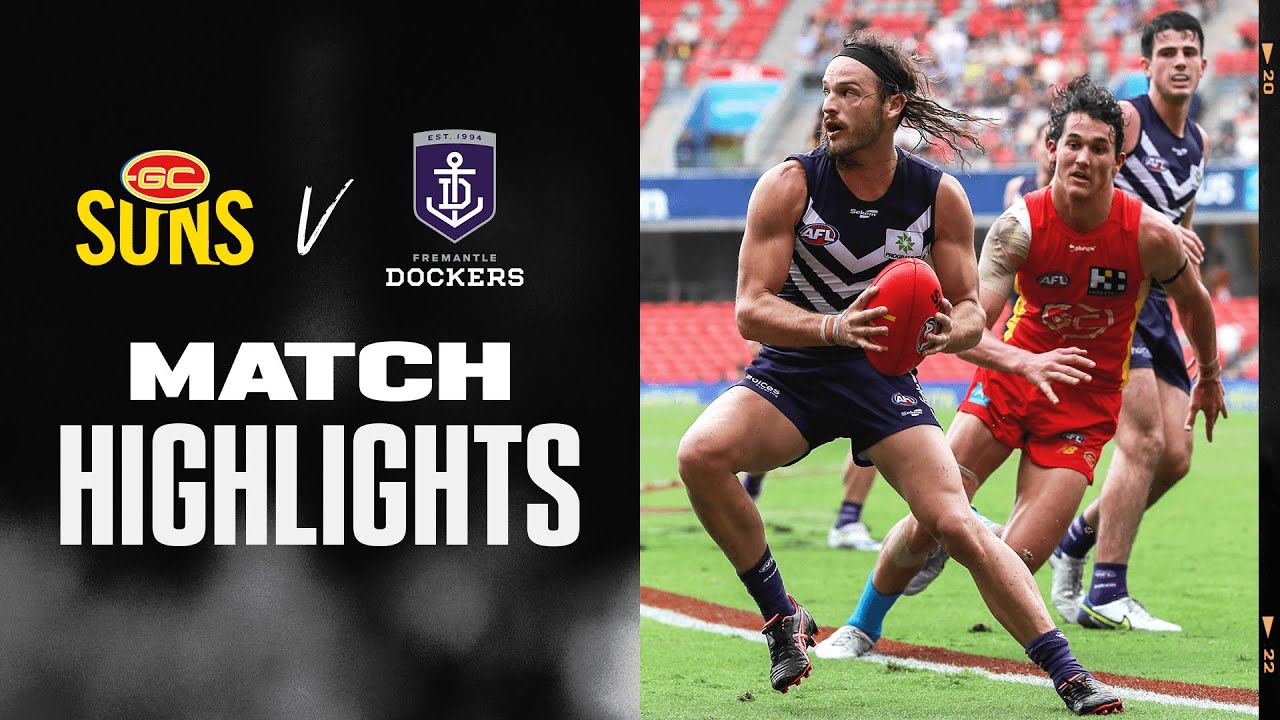 Carlton kicked the openning four goals of the contest, including a mark of the year contender and goal from Tom De Konning. Before GWS got their game going with three of the next four goals to reduce the quarter margin back to 21-33. GWS continued to make inroads in the second quarter, kicking four goals to two, with Jack Silvagni kicking a special goal for the Blues. The sides went into half time level at 47, thanks to a cleaver Josh Kelly goal from the pocket.

Jesse Motlop made the positive start to the third quarter, with a short pass he recieved, he went back and kicked his first goal in footy as the Carlton players got around him. Both sides kicked three goals in the third quarter, with Carlton being inaccurate, after a Lachie O’brian long bomb to put them 16-points up, GWS kicked the last two goals to reduce the three quarter time margin to six-points. Charlie Curnow got the Blues off to the right start in the last quarter, taking two marks and kicking two goals from set shots to get the Blues out by 18-points. As Silvagni took on the defenders and put Carlton four goals to the good. After the Giants pulled one back, a Sam Docherty long bomb from 60 settled the contest, with Zac Fisher extending the final margin to 30-points.

GWS put in a big effort for Leon Cameron’s final game, but the Blues were far to good in the end and survived the challenge, as their 30-point win is their seveth of the year, as the sit fourth place after nine rounds and are starting to really show the football world they are back after a long time. This new Carlton outfit couldn’t have asked for a better start to the Michael Voss era, they are looking hungry and exciting, and there’s no doubt they should at least play finals footy in season 2022. What’s even more impressive is they were able to show they can win without Harry McKay and can back themselves in to do so over the next five weeks while he recovers from a knee injury. 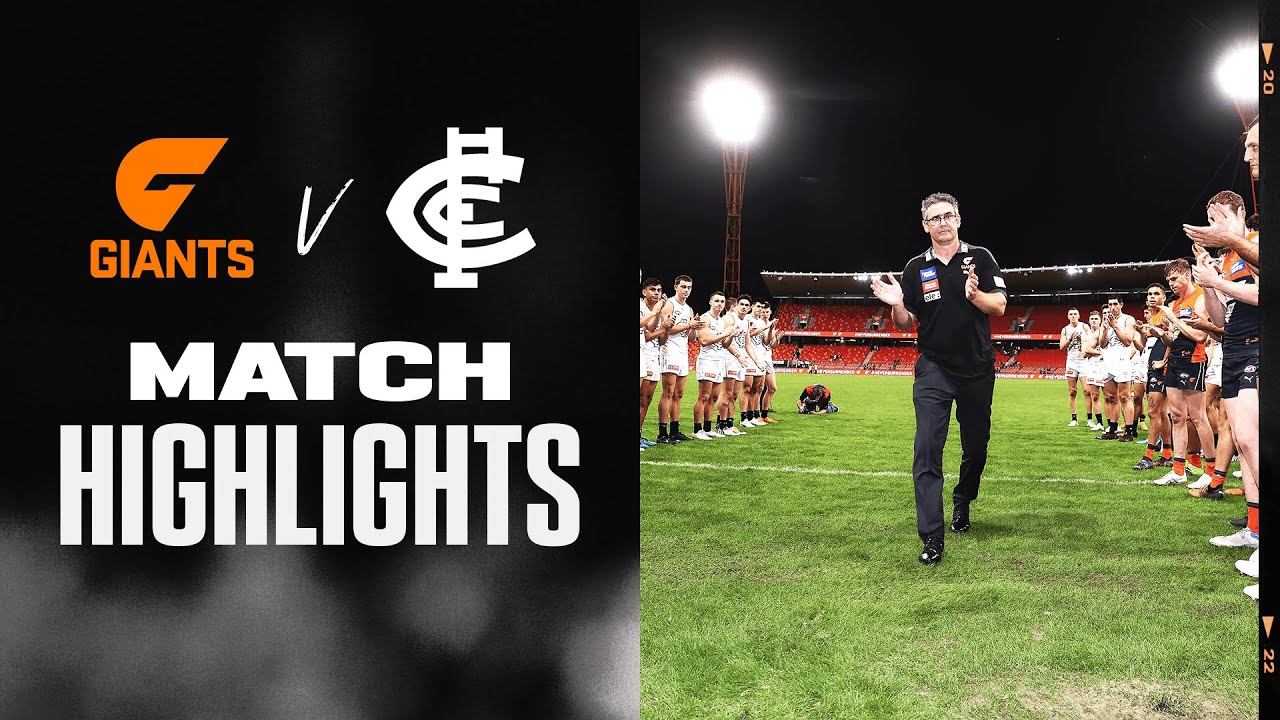 Melbourne made it 9-0 and won their 16th consecutive game, as they took care of West Coast by 74-points on Sunday night at Optus Stadium.

After the Eagles got the openning goal through Jake Waterman, the Demons kicked the last six goals of the first quarter to take a 41-6 quarter time lead. Ben Brown got the only goal of the second quarter, as Melbourne extended their half time lead to 51-9.

The sides kicked two goals each in the third quarter, as the Demons took a 66-22 point three quarter-time lead. Melbourne put the foot to the pedal in the last quarter, kcking seven goals to two and ran out 112-38 point winners, to start the season 9-0 and remain top of the table after nine rounds.

Melbourne will look to make it 10-0 when they take on North at Marvel next Saturday. West Coast will look for a victory when they travel to take on the GWS Giants on Sunday. 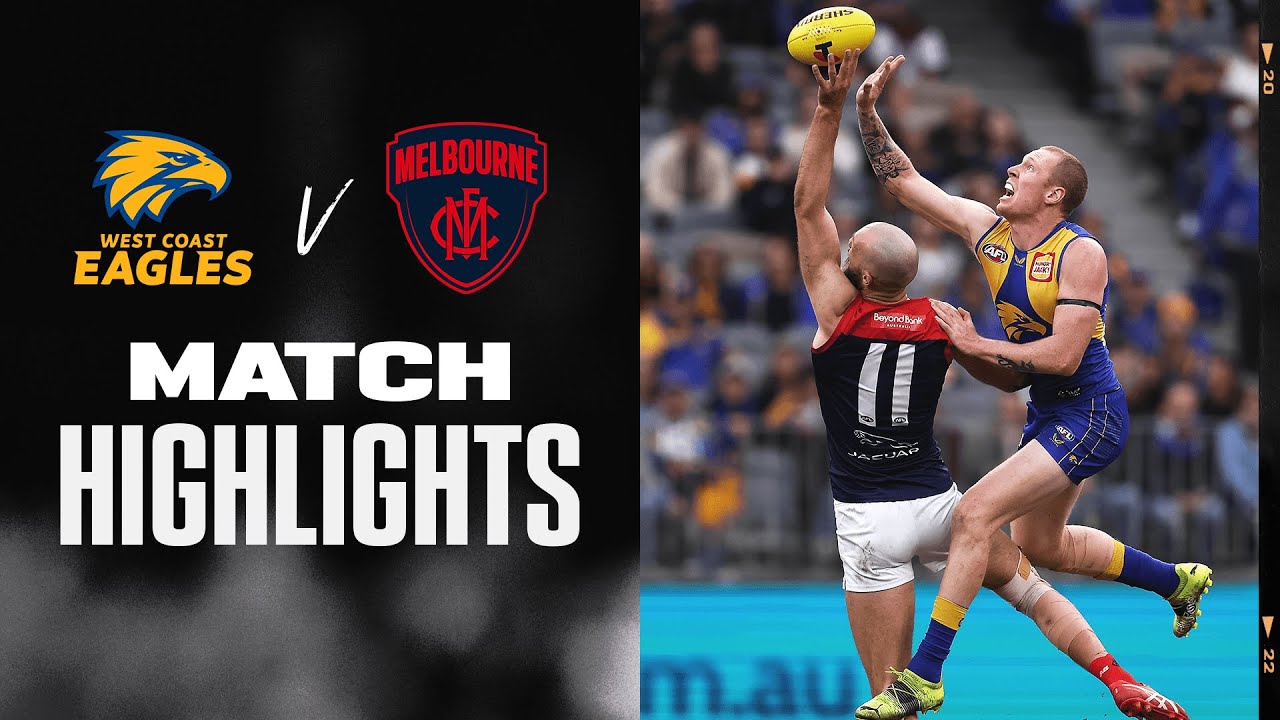