Carlton has made the perfect start under new coach Michael Voss. After trailing by 20-points in the last quarter, and headed for their 12th straight defeat to Richmond, the Blues piled on 7 consecutive goals to snap an 11 consecutive straight game loosing streak to Richmond. 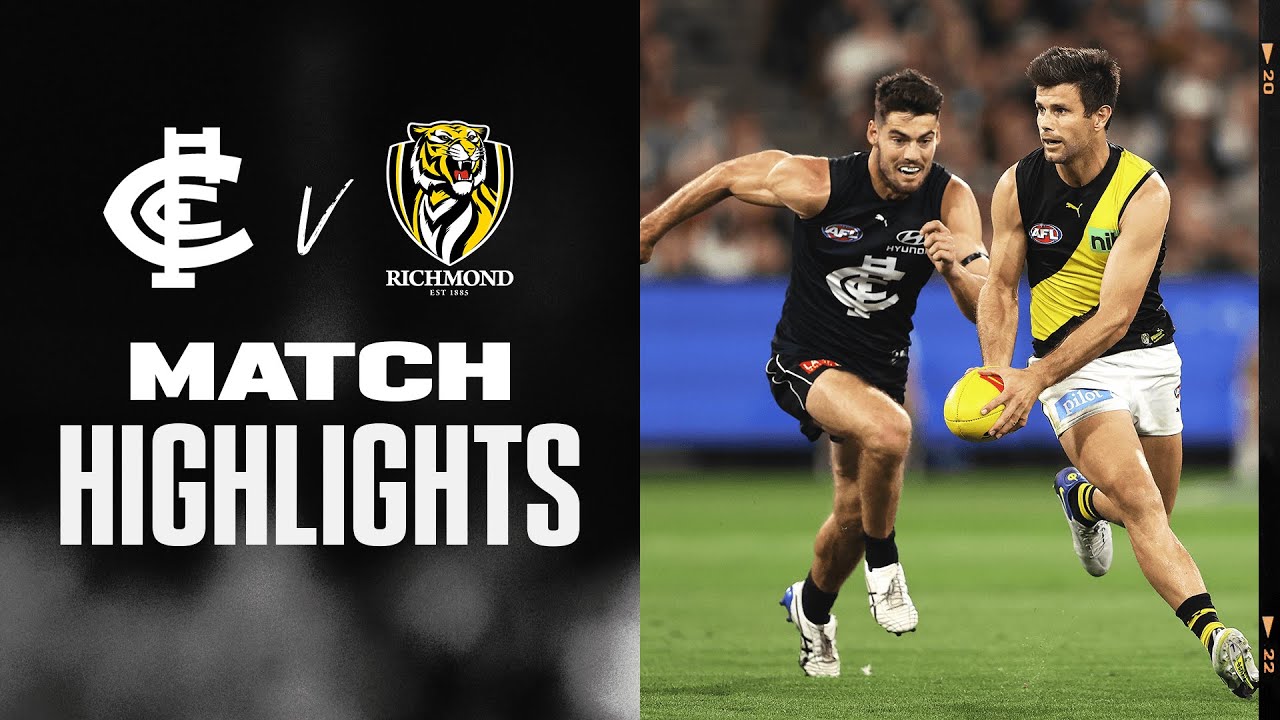 It was the perfect start to season 2022, after Carlton had lost every 1 round (and 2) clash over the last 9 seasons, since 2012 when they last began round 1 with a win. They looked shaky early starting slowly, after Richmond kicked 4 goals to 1 in the 1st quarter, they took a 20-point quarter lead. In the 2nd quarter, the Blues really flicked the switch, piling on 4 consecutive goals. Patrick Cripps kicking 2 of them and there was emotional moment for the entire team, when Sam Docherty was given a 50 and slotted a goal from 35 after his return to footy from his cancer battle.

With Carlton 8 points up at half time, it was the Tigers to respond in the 3rd quarter and the game was looking like it was going to follow the general Richmond winning in round 1 trend, as the Tigers kicked 7 goals to 2 in the premiership quarter to lead by 15 at the final change. After Shai Bolton extended the Tigers lead to 20 early in the last quarter, it looked done for all money, but this is possibly a new found Blues outfit under Vossy’s leadership, who went bang, bang, BANG!

Corey Durdin got his 2nd of the night, giving the Blues some hope at a 14-point margin. George Hewett recieved a 50 which brought him to within 30 out and his goal changed the entire complexity of the contest with the margin back to 8-points. Cripps recieved a short pass inside 50 and when he nailed the goal, with the margin back to 2 the Blues had massive confidence.

Jack Martin marked on 55 out, released an absolute BOMB and just like that, remarkably Carlton HIT THE FRONT to delirious fans around the MCG. Zac Fisher got in on the act a moment later, as the Blues got the clearance and he snapped home Carlton’s 5th consecutive major as the MCG erupted. Lachie O’brian’s set shot from 15 moments later all but put the result beyond doubt, and a 100 meter penalty to new recruit Adam Cerra iced a most beautiful cake for the Carlton football club, as they ran out by 25-points in the end.

It was the just reward for Michael Voss, he has recruited and reset the club beautifully. Bringing in players like George Hewett and Adam Cerra. Experimenting with Mitch McGovern down back, giving Corey Durdin a senior debut and including Matthew Kennedy in the starting line up, it has all come together beautifully.

The Blues will face another tough challenge in the Western Bulldogs on Thursday night, but will be full of confidence they can be at least competitive with the Grand Finalists of last year. The Tigers have the chance to get back on the winners list when they host Greater Western Sydney at the MCG on Sunday afternoon.